A perfect good night sleep of about eight hours is essential to have a healthy body. But due to increased number of work hours to meet the work related goals, the number of sleep hours is reduced drastically. Most people are aware of the fact that lack of sleep is the major cause for a great number of illnesses. This article presents an overview of side effects that arises as a result of lack of sleep.

Brain muscles get tired after long hours of working and hence, the person will start to show signs of lowered concentration. Lack of concentration proves to be very dangerous, especially if you are involved in jobs such as operating machines or driving vehicles. In addition to lack of concentration, other medical conditions may develop due to lack of sleep. They include type 2 diabetes, depression, headache and dizziness. 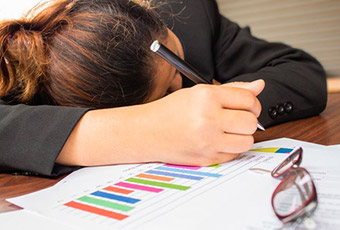 Lack of sleep results to headache, which if neglected turns into migraine headaches, which are very hard to bear. The pain is mainly concentrated in the neck region and may even radiate to the upper back region. You can lose this sort of headache in just one night, even without any medication, by sleeping for about eight hours without any disturbance.

Another major effect of lack of sleep is depression. It is a very serious side effect that has to be given immediate care; otherwise, there is a risk of the person developing suicidal thoughts. Symptoms of depression include staying away from people, lack of interest in any work and may even be short tempered. This sort of depression can be easily overcome with some help and proper sleep.

Dizziness is a very dangerous side effect of not sleeping for sufficient hours. The person may feel perfectly alright then suddenly may start to feel dizziness, blurred vision and nausea. This is very serious, as it not only harms the person, but also people around him if the person is involved in activities such as driving.

Lack of sleep also reduces the extent of growth. This is due, mainly, to reduced secretions of the cortisol hormone. It may also result in other problems such as reduced immunity and poor digestion. Reduced immunity, in turn, makes the person susceptible to a great number of diseases that weaken the body to a great extent and hence, the overall growth reduces. In addition to the growth hormone, lack of sleep may disturb other hormones responsible for the metabolism of compounds such as glucose. This may result in conditions such as obesity and type 2 diabetes.

In general, the damage done to the body due to regular activities is repaired during sleep. If there is not enough sleep, this repair process is disturbed.

Sleeping for less number of hours will results in poor memory capacity and the person may even develop hallucinations.

As can be seen, there are a great number of side effects due to lack of sleep, but these side effects can be easily overcome by having perfect sleep. Some people cannot sleep due to certain sleeping disorders rather than due to daily routine. If you are among of them, it is recommended to get an immediate solution for sleeping disorders, to avoid above given side effects.