People who have flat feet lack the arches which are normally part of the make-up of our feet so that all, or nearly all, of their soles touch the ground. These arches are designed to keep some of the sole off of the ground and can help prevent discomfort in the feet during some forms of prolonged exercise such as running or walking. Sometimes flat feet can be caused by the arches ‘collapsing’ in individuals over time or as the result of an injury.

However in other cases flat feet might be something a person is born with and around 20-30% of the general population never develop arches in their feet. An easy way to diagnose flat feet is to make wet footprints and to see whether they include the entire foot or just the sole and the heel with the normal gap between. There is an important distinction to make however between ‘rigid flat foot’ and ‘flexible’ flat foot. In the latter the arch will appear again when the individual stands on their tip toes. 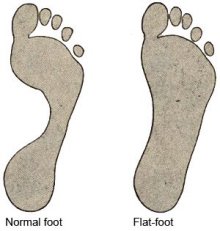 Someone whose feet begin to ache after a short amount of time may be accused of being flat footed and it is a commonly held belief that they are an impediment (it is believed by some – incorrectly – that the military refuse those with flat feet to sign up which was once the case but has since been abandoned). However in reality studies trying to find correlations between flat feet and increased physical injury or health problems have proven inconclusive and it is in fact believed that those with arched feet may have more chance of injury. It is only rigid flat foot that is a serious problem, as here there is actually a bone problem.

When running, flat feet force the runner to use a slightly different gait and causes them to ‘pronate’. Here the ankle turns further outward than it would normally and this forces the runner to work slightly different muscles as a result. While this is not a problem in itself – it is important to recognise that normal running shoes are designed for those with arched feet, and wearing these if you pronate can cause shin splints, back problems, tendinitis and increased chances of a twisted ankle. Thus it is necessary to get specialist trainers after having your run analysed, or to look for inserts that can correct your running form and prevent injury.

In the majority of cases then no treatment will be necessary for flat feet and it needn’t affect courses of exercise. However for those who do a lot of running, corrective shoes or insoles may be advisable.

Flexible flat feet are actually asymptomatic meaning they do not cause discomfort or interfere with daily activities. Generally the best way to treat flat feet is with orthotics such as ‘foot gymnastics’, or by getting inserts or specially designed shoes. In rigid flat food however there may be a more serious bone problem which causes pain in about a quarter of cases. Here it may be necessary to treat the condition during childhood via surgical procedures such as ankle fusion in order to prevent later development of arthritis.

For those who find that shin splints and sore feet are a problem but do not want or need to get surgery, some exercises can also help to prevent problems and these are those that develop stability and mobility in the ankles which can counter the effects of training the wrong muscles during running and help the ankle to compensate for the pronation. To do this try performing single legged squats or single legged calf raises while balancing, and progress further on to uneven surfaces as this becomes easier.