Muay Thai, a martial art form having its roots in Thailand has become extremely popular in many parts of the world these days. It is different from conventional western boxing and even kickboxing that is practiced in many countries as proponents of Muay Thai can make use of 4 sets of limbs that makes it a very interesting and exciting sport to watch. It is a one to one combat sport that requires a lot of agility and fast, nimble movements in the ring. 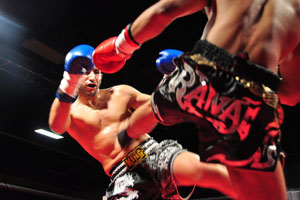 As is the case with all forms of martial arts, the workouts that are done, while learning Muay Thai have great benefits for a person. They help increase the speed, agility, strength and cardiovascular endurance of the practitioner. The exercises associated with Muay Thai greatly help in building up the stamina of a person and his overall health and fitness levels will also increase.

It is only natural that with such hard workouts such as those associated with Muay Thai, the physical fitness of a person greatly improves. The physique becomes well proportioned and the person gets into a great body shape. Muay Thai burns the fat quickly making a person lean and thin which is a great achievement in itself. It has been seen that those practicing Muay Thai have seen a better, glowing complexion as it releases all the toxins and waste from the body.

Muay Thai, as it teaches you methods of self defence, toughens you from the inside. It helps in boosting the immune system of the body, providing strength and endurance to muscles. All this works on the mental psyche of a person as he gains self confidence, and learns how to be disciplined. At a spiritual level, it surprisingly provides mental peace and relief from stress. Muay Thai also makes a person more self assured and self aware.

For generations, people have learnt this martial art not only for self defence, but also for physical and moral well being. It is a good martial art technique that induces fear in the minds of others which is why scores of children and women are learning this invaluable Thai combat sport. Proponents say that they have greatly benefited from Muay Thai as it has taught them virtues such as compassion, patience, endurance, gratitude and honesty.

For those who are obese, Muay Thai is nothing short of a boon as it makes a person lose fat in the shortest possible time. As such, to get back into shape and have a glamorous body, Muay Thai is a great workout. Those having low self esteem have also benefited from this Thai martial art form as it instilled confidence in them and they learnt how to value themselves more. For those who have a weak immune system, Muay Thai works to build up stamina and endurance and they face lesser diseases after indulging in this great martial art form. Muay Thai makes a person courageous and fearless but at the same time honest and compassionate.