Some people buy their kids Goldfish because they think they will be the easiest of pets to take care of. Nothing could be further from the truth. Goldfish are fairly self supporting fish but there are a lot of common illnesses that they are stricken with. It is not at all rare to come home and find a Goldfish floating belly up in the fish tank only to have to break the sad news to the kids that Sam the fish is dead. However, if you know ahead of time some of the most common causes of problems in Goldfish then you may be able to look out for signs and symptoms of sickness. The following disorders are the most common among Goldfish. 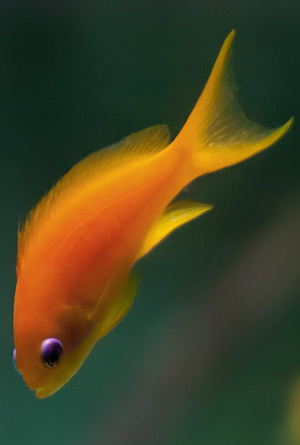 If you feed your Goldfish live food then this is one illness that you should definitely be on the lookout for. Anchor worms are tiny parasites that actually become embedded in the skin on your Goldfish. They can also strike other fish but today we will focus primarily on the Goldfish. If they become visible then they look as though they are very small sections of thread or string that are about 5 to 10mm. These parasites also have a forked tail but they are generally so small that it is hard to detect it. These parasites are typically reddish brown, clear white or greenish in color. The problem with these parasites is that the wounds they cause can become seriously infected and even kill your Goldfish is left untreated. If your fish does have Anchor worm then it may bump against the glass of the tank in an effort to scratch. You may also see little pieces of what look like thread hanging from the body of your fish. The best way to treat Anchor worms is a substance called Potassium Permanganate and this is added to the water in your tank for about 3 or 4 days. Normally this will do the trick if the parasites are caught early enough.

Cloudy eye is not a condition within itself but rather an indication that something else is wrong. Normally things like a poor quality of water or a bacterium in the tank will cause cloudy eye. Cloudy eye usually presents itself as a cloudy covering over one or both of the fish’s eyes. This could cover the whole eye area or quite possibly only the lens area. Often there is also a bit of a mucus layer over the eye. If you notice that your fish has cloudy eyes act immediately. Another thing to understand is that there are also other sicknesses that can cause a Goldfish to have cloudy eyes. You want to work quickly to determine the cause. If you leave the fish swimming around the tank with cloudy eye without doing anything you can bet that your fish will die from whatever it is that is causing the condition. If you test the water and see that all is well you may want to find out from your veterinarian what you should do about the cloudy eye. One tip is that putting a tiny bit of aquarium salt into the tank every time you switch out the water may actually help to prevent the occurrence of cloudy eye due to water quality.

Like cloudy eye, dropsy is not actually an illness in itself but a symptom that goes along with many other common Goldfish diseases. Dropsy can be caused by all sorts of issues including viruses, bacterial infections, parasites or even cancer. Typically dropsy will end up leading to a failure of organs such as the kidneys. Dropsy happens to be prevalent in Goldfish. This is one of the easiest disorders to diagnose in Goldfish because it is so evident. The main symptom is swelling of the eyes and belly that is very obvious to look at. You may also notice that your Goldfish’s scales are protruding in a way that closely resembles a pine cone. Unfortunately, this is one illness that most Goldfish do not recover from. This is because whatever it is that caused the dropsy to begin with is probably in its advanced stages by the time dropsy is diagnosed. However, this is not always the case 100% of the time. Some, a very small percentage but some Goldfish do survive provided the root cause was caught very early and treated. You can help to prevent this illness by keeping your tank clean and making sure that the quality of water is always good.

Obviously, as you can tell by the name, this disease is specific to Goldfish. This illness is also sometimes called White Spot but is known by the scientific community Ichtyopthirius. This is actually a parasite that is almost always lingering in the fish tank or pond but becomes more dangerous to the fish if the water quality is not kept up or if the fish has been ill with something else recently. Of every illness that attacks Goldfish, this is by far the most common. In fact, most everyone who has had a Goldfish for any extended period of time has probably dealt with it at least once. The symptoms are usually pretty clear cut. The fish may look as though someone has just sprinkled salt all over him/her. The fish may also show clear signs of trying to scratch by slamming against the glass or other objects in the tank. You may also notice that your fish does not seem to want to eat or that rapid breathing is present. In addition, cloudy eye, as mentioned above may become evident when this parasite is attacking your fish. The good news is that there are many different types of treatment for Ick since it is so common in Goldfish. However, your fish will most likely die if you do not get him/her treated right away.

Having a Goldfish is a bigger responsibility than some people think. However, they do make great first pets for kids as long as the parents help to educate their children on the proper care as well as what to look for in terms of illnesses. You cannot just buy a Goldfish, put it in a fish bowl and let it be. There are a lot of things that factor into making sure that your fish is healthy and that the water he lives in is in good enough condition for him.