One of the most popular of all toy breed dogs is that little ball of energy, the Shih Tzu. While they are tiny and appear to be fragile, don’t let that fool you! A Shih Tzu is much heartier than you would believe and they are actually quite intelligent. They are loyal, lovable and extremely protective of their owners and as such make an excellent watchdog. There are few dogs as cute and cuddly as a Shih Tzu puppy hiding under all that fur but these little tykes may be a bit difficult to potty train. Housetraining for Shih Tzu puppy may be quite a chore but if it is approached right your puppy will grow up knowing where and when it is okay to potty. 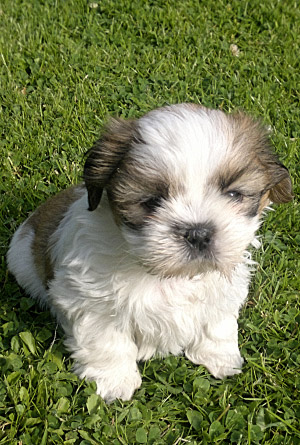 Although all dogs like a clean nest/living area, the prim and proper little Shih Tzu is even more intent on keeping the area where they sleep clean. For this reason housetraining a Shih Tzu puppy should begin with helping your puppy understand that the whole home is a living area. At night time take the puppy upstairs (or into the area of the home where the bedrooms are) and set up a little bed for puppy. Many owners find that by gating the area off the puppy will have fewer accidents during the night. During the day the puppy should be in the area where the family is.

Shih Tzu Puppies Are Babies After All

Recognizing that your Shih Tzu puppy is a baby after all should help you recognize that there are certain procedures which should be followed. First of all, you would never expect a human baby to be potty trained within days after being weaned, so what makes a puppy any different? Learn to have patience with your puppy during the housetraining process. Getting upset with puppy isn’t going to accomplish anything but more bad behaviors! If your puppy has an “accident”, instead of screaming and yelling at him, calmly pick up the poop and carry it outside along with puppy to the area where he is supposed to go potty.

Set a Schedule and Stick to It

This should be relatively easy for any parent who has ever potty trained a child. Just like setting up a schedule for sitting your child on a potty seat, a Shih Tzu puppy needs to be taken out to potty every two hours as well. Puppies have no more control over these things than little babies do so it is better to catch those accidents before they happen. After you see that your Shih Tzu puppy is able to make it in between potty breaks you can start to space them out a bit more. Eventually your puppy will only be going out three or four times a day.

Going Outside With Your Shih Tzu Puppy

One of the worst mistakes an owner can make is opening the door and letting the puppy go outside to potty on its own. There are two very logical reasons for this. Remember the advice from above – the puppy is just a baby after all and like all babies are wont to do, will probably get so sidetracked with all the sights and sounds that it might forget what it’s out there for! Next thing you know you will be calling your puppy indoors before it did its business and that’s when accidents happen. Also, you can ‘guide’ your puppy to the part of the lawn where you want it to go and over time this will become its bathroom.

Pros and Cons of Scolding

You are likely to hear people tell you to scold your puppy when it has an accident in the house. There are actually two schools of thought on that matter. The first contends that if the puppy is made to understand that going to the bathroom in the house is bad it will learn to go outside. However, there are those who believe that this only serves to teach the puppy to hide when it has to relieve itself. How many times have you walked into someone’s home only to smell an odor coming from a corner behind a chair or under an end table? Upon closer scrutiny you see a little pile of poop hiding there. That is a sure sign that puppy knew it was bad to go in the house. Obviously no one got it outside on time so rather than be scolded, puppy found a hiding place to do the dirty deed.

Are Rewards Good or Bad?

Here again there are two schools of thought in terms of using rewards to housetrain a Shih Tzu, or any dog for that matter. Some people contend that giving puppy a reward after going potty where and when they should encourages like behavior in the future. Others feel that puppies self-reward themselves when they were good simply because they did not mess up their living areas. If you are of the persuasion to use treats to reward your puppy after it made a successful trip outdoors, the best advice is to start weaning those treats over time so that eventually your dog will automatically go out without demanding a reward.

Even though that little ball of fur is the cutest thing in the world you cannot go slack in housetraining it or you will be sorry in the end. Puppies take a lot of work, maybe not quite as much as a human baby, but a ton of work nonetheless. If you are not prepared to spend the time and effort it takes to housetrain a Shi Tzu puppy then don’t be upset when your dog has accidents in the house.