Considering the high sugar content in sodas and food that we eat on a regular basis, it is surprising that more people haven’t gotten gum infections known as gingivitis. Blacked out teeth, a greenish crusty layer of foul smelling bacteria and worse portraits are the long term effects of gum infection. While treatments at the dentist may be expensive, there are ways to maintain your teeth without breaking the bank.

It has been said that there is no worse pain than tooth decay and gun disease. In the movie Castaway, the main character literally bludgeoned his own tooth out because the pain was driving him insane. Whether these remedies are soothing to gums that are infected or whether they have medicinal properties that reverse the effects of gum infection is dependent on what remedy is being used. Each plant, herb and good practice listed here will have its own limits to success. There is nothing better than immediate dental attention in the case of true emergency but if you’re simply feeling an indent in your gums, a general swelling around your teeth or aches in your mouth more frequently than you used to, try these healing recommendations.

Flossing has been proven as the most effective way to prevent gingivitis because it removes food particles that could otherwise decay and get embedded in the gums. By flossing daily at the end of the night, you will be able to both alleviate yourself of small food particles between your teeth, you also can scrape between your teeth to remove plaque and you can stimulate your sensitive areas of your gums with the floss. Wax-coated is fine – flavor is up to you. There are some flosses that may boast that they’re flavored all-naturally; check online and ask your dentist. If one can floss after every meal it is said to be ideal for the health of your gums and teeth. A strict regimen of flossing will ensure that your pearly whites stay put for life. In addition, proper flossing should take less time than brushing your teeth. Average time it takes for a proper brushing is five minutes, (few people reach that) and flossing only takes two once you get the hang of it. More satisfying than toothpicks and often will leave your breath smelling piney or minty fresh, floss is the best way to prevent gum disease.

The same plant that gets marsupials stoned in the Australian outback is very soothing to sore gums. Properties of eucalyptus, while deadly if ingested can numb the affected area. As long as you don’t try making eucalyptus tea to try curing yourself, rubbing eucalyptus leaves or eucalyptus paste on your gums affected by gingivitis will reduce the swelling and pain.

Goldenseal can be used as a mouthwash that will fight off contributing factors of gingivitis. Goldenseal shows strong anti-bacterial and anti-fungal properties – by using a tincture of pure goldenseal as mouthwash you’ll be getting rid of a lot of slimy ugliness in cases of gingivitis. Taking goldenseal supplements while treating your gum infection with goldenseal tincture mouthwash will increase the effectiveness of the treatment.

Surprisingly this very popular method of preserving the mouth has faded with time. Gargling with salt water was a way like mouthwash to clean your teeth. It still is in fact. The salt in the water will dry out the skin of your gums and strain the bacterial infections in your mouth. Potency of the salt water solution would be dictated by the severity of the case but not to exceed 15-20% as you can actually salt your gums so much that they crack when they dry. When gargling with salt water you also don’t want to swallow it.

Good for pain, clove oil has a naturally pain-relieving effect. It is a very sugary substance but works as an analgesic and keeps pain far away. Clove oil may not be the best direct way to cure gingivitis, but for very bad pain related to gingivitis; clove oil in addition to treatment will help soothe the pain. It numbs nerves and acts like a weak form of general anesthesia.

Cinnamon oil is good for pain like clove oil is though it is a strong sensitizer and pure cinnamon bark, (as well as essential oil) can be a skin irritant. If you use cinnamon oil, it is recommended to dilute it in Jojoba oil one to twenty parts, if not more. Be careful when using cinnamon oil to treat the skin and mucus membranes and remember that it is a natural irritant, and maybe you’ll catch the healing benefit from it when using it properly. 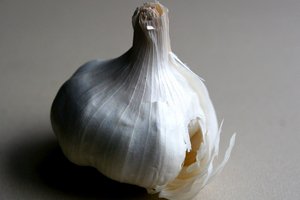 Garlic can be useful in dealing with pain as well. Garlic, however, has very astounding properties when it comes to boosting your immune system. Garlic that is boiled in coconut oil will make a rich garlic oil that can be rubbed into the gums to both combat the spread of gingivitis and to soothe the pain.

As sadistic as it sounds to put salt and lemon on an open wound, this treatment is effective at stopping the progressing of gingivitis. Salt will dry the area out and lemon is highly citric which will kill bacteria. This WILL hurt. Nonetheless, if you need your gingivitis gone, it’s a pretty cheap and easy fix.