Bad behavior is a common occurrence in dogs, but just like any other bad habit as long as the owner is committed to trying to change his dog’s misbehavior it can be done. Bad behaviors need to be corrected as soon as possible because as more time passes there are less chances to undertake smooth training measures. There is no reason why an owner should allow his dog to misbehave, and postponing the correction will only make it more difficult for the owner to break and change the habits of his pet. 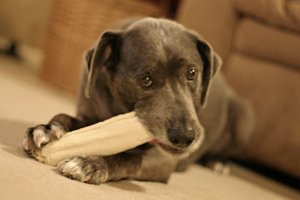 When trying to break a dog’s bad habits, the owner must take into account the importance of avoiding having his dog’s misbehavior reinforced by his actions. The owner must correct his own behavior first before attempting to create changes in his dog’s habits. If the owner does things to encourage the dog’s misbehavior, it is not surprising that the dog doesn’t learn that his actions are displeasing for his owner. For example, if the owner wants his dog to stop barking, the animal won’t ever cease with this behavior if the owner gives the dog what he wants as a result of his barking. Indulging in your dog’s inappropriate demands will only reinforce his bad habits.

An owner should always be consistent in trying to break his dog’s bad habits. If you prompt your dog to do a certain thing one day, and in the next you completely forget about it, you will only succeed in confusing your dog and getting mixed signals is not compatible with a change in behavior. You’ve got to be committed if you want to break your dog’s bad habits. This rule applies to the nature of your commands as well. You need to stick to your commands if you want to force the dog to obey, so make sure every other person uses the same commands as you do.

If you want your dog to learn which things are okay to chew and which are not, which places are suitable for urinating or where he is allowed to dig in the yard, you need to provide him the alternative. Interrupt the dog if you spot him misbehaving and direct him to the designated place or toy. When he complies, praise him and give him a treat. This will help the dog accept your alternative and forget all about his previous misbehaviors.

If you want your dog to be trained quickly and efficiently you need to follow a certain schedule. Commitment is again the key in breaking your dog’s bad habits. Thus, take some time to practice with your dog without being interrupted by something or someone. No matter how nervous you are about your dog, do not punish him but work on correcting his behavior and praise him when he complies.

Barking: Dogs bark – it is their natural way of communicating something; however this behavior should stop if the dog is commanded to do so. The best way to convince your dog to cease barking is to make use of effective negative reinforcements. These vary depending on your dog and upon the circumstances of the behavior. When the dog barks, voice your command with an authoritative tone. If the dog repeats the barking, make use of the negative reinforcements to make him stop. This can include a leash check, a squirt of water or whatever methods you find acceptable. When the dog finally complies, do not forget to praise him.

Food guarding: This is a common problem since dogs do tend to protect their food. This behavior is based on the same instinct that drove their ancestors into protecting their food in order to survive in the wild. Although common this behavior must be corrected, especially if the owner has small children who may try to make contact with the dog while he’s eating.

Do not ever hit the dog or take his food away when he’s acting territorial since this will only confirm to him the need to guard his food. An effective way to break this habit is by teaching him how to behave in the case of the small treats you’re usually giving him as a form of praise. Whenever you offer him a treat encourage him to take it by voicing a command and if the dog snaps too hard at the treat, voice a stopping command in a harsh tone and try to delay the food until the dog is ready to take it gently. Don’t forget to praise him when he does this. Practicing this sort of behavior will make the dog learn that his owner has the right to control the small treats he’s being offered. In time, this method can be expanded to his regular food bowl.

Chewing: Dogs tend to chew from a very early age, this behavior being triggered around teething time.

Chewing is not a cause of tension in owners whose dogs chew what they’re supposed to chew, yet in other cases, dogs end up damaging the furniture, shoes, carpets etc. Dogs also chew when they are isolated, bored, stressed or anxious and thus they will repeat this behavior because it is self-reinforcing.

You don’t have to stop the dog’s behavior as chewing is normal amongst canines; what you do need to do is redirect his chewing act upon designated chewing toys. If you catch your dog munching an inappropriate object, command him to stop and offer him the adequate toy to chew upon. Even if you offer the dog a lot of toys to test his teeth strength with, he may get bored of them eventually. This means that you need to have a variety of chew toys available for him, and to rotate a group of items each week so that the dog can find new and exciting toys to chew upon. During training, try to remove tempting objects from the dog’s sight and always keep a few chew toys around for whenever he feels like acting wildly.

Digging: If your dog’s digging obsession ruined your freshly planted roses one too many times, it is high time you command him to stop. To break this bad habit, supervise your dog while he’s in the yard and if you spot him misbehaving, interrupt his digging with something that your pet will be eager to avoid such as splashing him with water from a garden hose. If there are places in the yard where you wouldn’t mind your dog to practice this favorite activity of his, lead him to that particular spot and let him dig all he wants. If he keeps using the old spot, make him stop with an authoritative voice and continue splashing and redirecting him to the designated place until he learns the place where he’s supposed to dig.

These are just a few examples of bad habits that can be broken as long as the dog’s owner knows what method should be applied in the attempt of changing his pet’s behavior.