Shih Tzu or Chih-Tzou in the Mandarin language, is a term associated with a very old breed of dogs, and like all ancient things, it is subject to fascinating historical tales and legends. Shih Tzu literally translates into “Lion Dog”, and it is believed that these dogs were named so because they were bred to resemble the lions displayed in the traditional oriental art – one fine illustrative example of this being the works of art depicting the Chinese guardian lions.

The Shih Tzu is often a synonym with “Xi Shi quan”, a term originating from the name of Xi Shi who was said to be the most beautiful woman in ancient China. A lesser used but more modern nickname for a dog of this breed is the Chrysanthemum Dog, an English notion originating in the 1930s. Shih Tzu’s are also known as Tibetan Lion Dogs, even though no one has successfully determined whether this breed is Tibetan or Chinese. 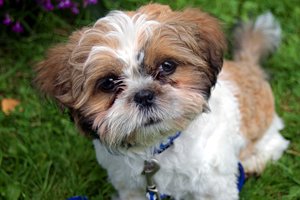 Shih Tzu dogs resemble the ones belonging to the Lhasa Apso breed, and are known for being quite small in size, robust and covered with a long, double, thick coat which is usually cut giving them that adorable, super fluffy appearance. Their head is round, with large, hazel or dark colored eyes, a short and flattened dark colored nose, with a short muzzle and drop ears. They also have a heavily furred tail which is curled over the back and their long, silky coat can be seen in any color, although most specimens display a blaze of white on their forehead and at the tip of their tail.

Shih Tzu dogs are highly valued for being excellent pets. Although their small size gives animal lovers the impression that these dogs are fragile, they’re actually quite robust and resistant, and are far less delicate than other petite sized breeds. Despite of the arrogant way of carrying themselves, they are in fact extremely playful, loving and a really friendly dog breed – even with small, restless children. Shih Tzu dogs are also full of life and highly alert, these features recommending them as good guarding specimens, who like to bark, although they keep themselves quiet when inside the house. They are highly sociable, really intelligent but also stubborn animals and they tend to adapt well to any circumstance, being one of the preferred pets of elderly people.

The oldest bits of information about Shih Tzu dogs come from documents, paintings and objects of art dating back as early as AD 624. It is no wonder that there is a lot of mystery involved in the origin of this breed. As to where the latter is concerned, it is believed that in the 17th century dogs were brought from Tibet and into Peking – the Forbidden City. It was in this place that most probably the Tibetan Lhasa Apso and the Chinese Pekinese were bred.

Even if the theories surrounding the beginning of the Shih Tzu’s existence are quite numerous, one piece of information is certain: these dogs made a live presence at the ancient Chinese Imperial Court and the breed was so incredibly valued and respected that even when the Chinese people started to trade with Western civilizations, they utterly refused to sell or trade them. It is also believed that the Chinese Court received a pair of Shih Tzus as a present during the Tang Dynasty (618-907 AD), and that they were brought from Tibet to China in the middle of the 18th century during the Qing Dynasty. A very interesting aspect regarding their existence is linked back to the Chinese Revolution when the Shih Tzu breed grew almost extinct, and only seven specimens from each of the two genres were saved. This suggests that, basically, all of these dogs can be tracked back to one of these Shih Tzu.

Europe got to know about these dogs in 1930, when the first specimens were imported into England and Norway. Five years later, the Shih Tzu Club decided in written form the European standard for the breed; and although the dogs were at first categorized by the Kennel Club as “Apsos”, the name of the breed was soon brought back to that of Shih Tzu.

Shih Tzu dogs were brought to the United States by members of the military. This took place during the Second World War when the American army was stationed in England leading many to fall in love with the breed. Upon their return home, they introduced Shih Tzu specimens into their natal country, but it was not until 1969 that the American Kennel Club recognized this breed. The breed now enjoys fantastic popularity as it is highly valued in the United States as both an animal companion and as a show dog.

Getting back to the ancient times, it is believed that Shih Tzu dogs were kept as ornamental company dogs in Tibet for more than a millennium. Some also give credence to the stories saying that Shih Tzu dogs were considered sacred by Buddhists, and so they were kept in temples. The idea behind this statement is explained by the legend saying that the Buddha of wisdom or Manjusri as he was called was accompanied by a very small dog that was known as the “Lion Dog” and had the ability of turning itself into a lion to carry Manjusri on his back. It is not clear why people believed in the fantasy nature of this dog, but since there were no lions in Tibet, people didn’t have an accurate image of what the African lion looked like.

The statues depicting the two dogs guarding the Buddhist Temples were believed to be a male and a female specimen of Shih Tzu, and were known as the Fu Dogs, “Fu” translating from Manchurian into “happiness”. The cheerful Ying Yang dogs were carved out of stone, jade, teak, ivory and cinnabar and were also made out of bronze or ceramics. These dogs that were believed to be blessed by Buddha were portrayed with the male dog holding a ball with his left paw, and the female holding her puppy. Such an image is not random but charged of symbolic meaning. The image illustrating the male dog hints towards the dual powers over nature, towards energy, wisdom and precious stones. The image of the female dog and her cub symbolizes protection, play and a disciplinary attitude.

Returning to the vivid, ancient idea that Shih Tzu dogs are blessed by Buddha it is believed that the physical features of this breed are proof of the eternal connection between Buddha and the Shih Tzu specimens. For example, the color spot located on the forehead of the dogs is the place where the noble teacher bent down and placed a kiss whereas the flash of white on the same area is said to be the place where Buddha laid his finger in blessing. In addition, there are various parts of the Shih Tzu relating to Buddhism, and all these are explained by the ancient symbolism attached to this breed of dogs.