CPR stands for ‘Cardiopulmonary resuscitation’ and is a procedure used in emergencies to try and help return a patient from cardiac arrest (the point at which their heart has stopped beating sufficiently for normal blood flow) and is used when the patient is showing no signs of breathing other than gasps. CPR can be performed in a hospital by medical experts, or on site by others with no medical training.

CPR utilises chest compressions, meaning that the chest is being forced downwards, and these must take place at a rate of 100 per minute in an attempt to manually pump the blood through the valves of the heart and thus re-start circulation. In some cases the individual can either blow into the patient’s lungs (through their mouth) or use a device that works to provide ventilation. 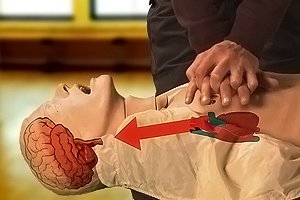 Contrary to popular belief the main intention of CPR is not usually to restart the heart – which is a relatively rare occurrence. Rather the aim of administering CPR is to return the flow of the blood and the oxygen therein around the body which can help to delay tissue death and brain damage. CPR can be used as a means to continue the flow of the blood around the body then until defibrillation can be used – the administering of electrical shocks to restore the desired heart rhythm (known as a ‘perfusing’ heart rhythm). Defibrillation however can only be used successfully when the individual has a specific heart beat prior to the shock – which can be: ventricular fibrillation or pulse-less ventricular tachycardia. However if the individual does not have the correct heart rhythm necessary for defibrillation it is sometimes possible for the defibrillation itself to put them in this condition.

A History of CPR: Predecessors

It was in the 19th century that Dr H. R. Silvester first postulated a means of artificial respiration which was dubbed the ‘Silvester Method’. This early predecessor to contemporary CPR involved laying the patient on their back with their arms above their head (to aid in the opening of the airwaves) and then pressing them on the chest to cause exhalation and it was advised to do this sixteen times a minute. Interestingly you can see this method being used in some old films.

Later this developed into the ‘Holger Nielson technique’, which was a technique first illustrated in the 1911 edition of the Boy Scout Handbook. This involved laying the person on their front with their head to one side (to prevent the floor from blocking their face) and placing their palms on the ground. From here they would apply upward pressure to the elbows to raise the upper body, then downward pressure on the back to force air into the lungs. This continued until the mid-20th century and again can be seen in many TV series and films of the era. These techniques however were more populated by word of mouth and did not gain widespread acceptance throughout the medical community.

However in the middle of the 20th century the medical profession took notice and artificial respiration along with chest compression became key in resuscitating patients following cardiac arrest. This method was discovered and developed by James Jude, Peter Safar and Guy Knickerbox and this introduced the use of external chest compression. The technique was developed at Johns Hopkins University and was then demonstrated on a dog and later on a child. The findings were presented at a Maryland Medical Society meeting in 1960, and were later shown in a 1962 training video called ‘The Pulse of Life’. From here it was used throughout the medical community and was subsequently taught to members of the public from 1970 onwards.

A relatively recent development in CPR is the use of automatic devices which can provide automatic compression for the rescuer. These use either pneumatic or electrical power to apply the pressure – the ‘AutoPulse’ for instance is an electrically powered band that is wrapped around the patient’s chest and which ‘squeezes’ pulses in order to provide the compressions. These have several advantages over manual CPR in that they do not tire and slow down or begin to provide less powerful contractions as people tend to do, and because they do not require as much space when the patient is in a confined area such as the back of an ambulance.