Sexy men are everywhere. They come in all sizes and shapes. They may not all appear beautiful at first glance but after getting to know them a little bit that is when you become of aware of how sexy they really are.

This is because personality makes up for at least 75% of what attracts you to a person. Most people have seen someone who appeared outwardly beautiful and then after spending 5 minutes talking to them found that they were totally turned off by this person that at first glance seemed like a god or goddess. This applies to both men and women but following are some of the things that make men truly sexy, no matter what they look like physically. 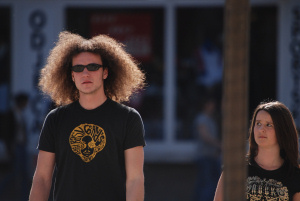 Not many women are attracted to men who sink inside their turtle shells the moment they are approached. A man appears to be much sexier if he is self-assured and carries himself with confidence. In other words a man is sexiest when he appears to be of the attitude that he can take you or leave you. Men who grovel and act like they are too needy and clingy are not usually the guys that catch the girl first. Remember the old saying “nice guys finish last.” This is certainly not to say that men should be absolute jerks to women but they do not want to appear too eager during the first few encounters.

Women love men who can make them laugh and are quit with wit. One of the main things the women fall totally and undeniably in love with is a guy who has a great sense of humor who is not afraid to be himself in any circumstances. This type of man can bring a smile to everyone’s face no matter how dreadful the circumstances may seem at the time. Basically, if a man can make a woman laugh then he is one step ahead of the game when it comes to being irresistible and sexy.

Let us not pretend that a buff and gorgeous guy is not one of the sexiest sites you will ever see. A man who takes good care of his body and works out is always something pleasant to look at. However, if he is full of himself and knows that he is all that and a bag of chips this will tip the scales against him. A gorgeous man who treats women with respect and does not think that he is God’s gift to women is surely a sexy man. In addition, a man who is seriously into physical fitness and continuously rides the women he dates to keep up her physical appearance as well can also be a major turn off.

Flirtatiousness is not really anything that can be described. We all know a flirt or two. The problem is some guys take flirting to a level that is just simply obnoxious. A sexy man will flirt just the right amount by using eye contact and body language, without coming right out and making inappropriate or blatantly rude comments. Flirting is an art and if a guy has that art down to a science then he will be naturally sexy to just about any woman.

A sexy man will want to make sure that his woman is well taken care of before thinking about himself. There is nothing sexier than a man who is an attentive and good lover. Some men breeze through sex just to get what it is they came for (no pun intended there). These men are boring in the bedroom and let’s face it, a boring guy in the bedroom is not a sexy man by any stretch. When you think of a sexy man you may think of Antonio Bandaras and Denzel Washington all rolled up into one. After all, how many women can honestly say that these two men would not be the epitome of sexy to them.

There is something to be said about pheromones and how they can attract people to each other. Some studies have shown that a woman can actually pick her husband’s t-shirt out of 100 different t-shirts just by the way it smells. This is because there are chemicals that actually attract some people to others. There is a lot of scientific data out there about pheromones and how they actually work. If you meet a man who has pheromones that attract you then he will be the sexiest man alive to you.

While some women actually enjoy wearing the pants in the family, the average woman wants a masculine go getter who will be more than happy to provide for her. A man who works hard and takes care of his family while showing love and affection to his woman is definitely a candidate for sexiest man of the year. In addition, men who are cry babies and complainers and who never seem to want to do a thing are more of a thorn in a woman’s side than anything. Most women want a man who has a nice balance between sweetness and masculinity.

There are so many things that make men sexy that it would be impossible to list them all here. The reality is that beauty is always in the eye of the beholder and what one woman may think is amazingly sexy may not be so to another woman. The most important thing in terms of being a sexy man is in knowing what you want in life and going for ut. There is no doubt that a successful man is a sexy man. For this reason a man who has goals in life and is not afraid to go for them is by fat the sexiest type of man.