Marriage is a highly complicated subject and many of us find we have differing opinions and differing experiences of entering into matrimony. Many of us consider marriage to be the ultimate state of happiness – the target that we worked much of our youth towards, and the romantic bonding of two souls so that we need never be alone. It is also of course the first step towards building a family and towards having a stable, loving and happy home to come back to day in and day out.

But of course it’s not always that simple and marriage can certainly have its downsides too. Many men in particular will joke that their lives ended as soon as they got hitched – that their sex life plunges into oblivion, that they lose their freedom and that they never get any time to hang out with their friends any more. Likewise everyone can start to feel at some point as though they haven’t made the most of their lives, as though they settled down too soon, and as though there’s a lot more out there to be explored (FYI this is what’s known as a mid-life crisis). In other cases you might simply find that you don’t have quite the spark that you used to have any more, that you are no longer getting on as well as you did with your betrothed and that you feel you are ‘trapped’ as a result in a potentially loveless or joyless marriage. 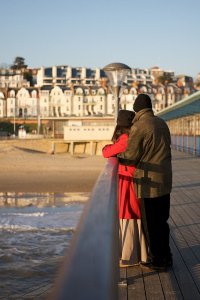 Before you break up though this is a very serious decision you are making. Ending a relationship should always be considered very thoroughly and is always a very serious matter – however ending a relationship with someone you are married to is a hundred times more serious and could potentially ruin both of your lives. There will be complicated legal and financial issues to resolve, you will forever bother be ‘divorcees’ and you won’t be quite as young and attractive a prospect as you were last time you were on the dating scene.

Those are reasons though not to get divorced, which are quite different from the reasons to stay married. Here we will look at some of the good things that marriage has to offer – even at the worst of times.

One of the best things that marriage has to offer is the sense of security that you get from being married to a partner. This way you are a part of a bigger whole and someone that you care deeply for has sworn to never leave you. That means that when you’re old and grey and when you don’t have the looks you once had, they will still be there and they will still want to be with you. At the same time you can come home from work no matter how bad your day has been and they will be there to hug and to love you and you and to make everything okay. What you also need to think about is the stability that it offers other people – and in particular your family and maybe children. Even if they’ve grown up and left home, anyone likes the idea of coming home to their family they grew up with and going back to the way things were.

Linked very closely to the last point is companionship – and if you are married then you need never feel lonely or like you don’t have anyone. This is again particularly true as you get older, and when you don’t have quite as much going on in your life, or quite the ability to go out and mingle with new people, then you will greatly appreciate the simple fact that there is someone there with you to talk to and to share jokes with. Perhaps you don’t feel quite the same passionate desire for them that you once did, but you shouldn’t let this be a really big deal. Most likely what you feel has simply transformed into a sense of companionship that in many ways goes deeper than a more superficial sexual desire.

Divorcing a partner is highly expensive and particularly as you will be forced to divide your assets leaving you with very little money. However this isn’t the only reason you’ll lose out financially if you don’t stay married – for at the same time marriage is a great way to share the burden of your expenses – your living costs and your bills etc. Going it alone and paying for rent by yourself or putting down a deposit on your own is not a very efficient option.

You might be considering divorce as a way to have more exciting sex with more people, and to try things your partner doesn’t want to try with people who are younger and better looking. However while this might be a nice fantasy, it is very rarely a reality. Firstly there is no guarantee you will meet these partners – particularly as you are now an older individual with a lot of baggage – and then even if you do these tend to be cold, unsatisfying experiences if they are one night stands which will leave you cold. They are also apart from anything else not particularly safe or healthy. By staying with your long term partner you will both know what each other likes, you will both be comfortable enough to try new things, and usually you will have the guarantee of at least semi regular sex – and this connection and intimacy is a highly important thing for many people to be truly happy.

Just as you share the burden of your finances when you are married you also share the burden of chores. In a typical old-fashioned relationship the man takes care of DIY while the women are more likely to cook the meals – though these roles are often reversed these days. Either way, if there are two of you doing the chores around the house it is very simply possible to get more done and as a result your home will look a lot cleaner and tidier. Look at your living environment now and then think back to where you lived before you were married and what that was like. Is this really something you want to go back to?

Being in a long term relationship such as a marriage also brings a certain amount of balance. It brings a view from another gender, and a whole different set of beliefs. Believe it or not this can actually be very valuable in helping you to make the most reasoned decisions and it’s true that at least in general, two heads are better than one.