Nowadays, a lot of people are having weight problem and they’ve tried various types of diet to reduce their weight without result. Alcoholic beverages are commonly consumed by people around the world; some people believe that by consuming low-calorie alcoholic beverages, they can burn some calories from their bodies.

By consuming alcohol regularly, you can eventually experience its bad impact, which affects your metabolism performance. The American Journal of Clinical Nutrition has performed a study on this subject. About 8 men were told to consume a mixed drink of vodka with sugar-free lemonade which contained about 90 calories. Before the test began, a measurement of metabolism level on these 8 men was performed. Several hours after the test, the metabolism level of all 8 men had dropped massively up to 73% compared to the first measurement before the test. The conclusion of the drink test is that alcohol can affect to the body’s metabolism (body’s capability to convert fat into energy) performance. 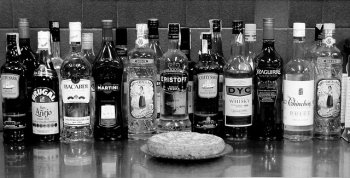 Further, alcohol is also as an appetite trigger, which can make people want to eat more. If you consume a large amount of alcohol after eating then you will tend to eat more (it’s called fattening affect). Mostly it happens if you combine alcohol with high-fat meal. This fact has been proven by a case study where people are indicated to eat more when their meal is served with beer or wine rather than a soft drink. Let’s dig deeper about how alcohol affects the weight loss program and how alcohol correlates with food and water.

When you’ve overweight problem, then alcohol should be avoided even more. If you have consuming it in a regular basis then you need to cut it down gradually. Alcohol is surely a bad option for people who are undergoing a diet plan, based on these reasons:

a. Alcohol is high in empty calories

Alcohol offers no nutrients whatsoever. So, if you drink alcohol too much, it will not feel satisfying when you’re hungry, but still, you take in a large amount of calories.

b. Alcohol delays the fat-burning process

Alcohol delays your diet efforts, because it slows the fat-burning process down. When undergoing a diet program, you should try to maximize your metabolism level.

NIAAA (National Institute on Alcohol Abuse and Alcoholism) has conducted a study to measure the relation between the BMI (Body Mass Index) with the alcohol consumption. The result is:

– Participants with lowest BMI tend to drink alcohol three to seven times a week, and only drink once during those days.

– Participants with highest BMI tend to drink less frequently, but they drank larger amount during those days.

Based on that fact, we can see the relation between the values of BMI with how often a person drinks alcohol in a given day. Alcohol is more dangerous if it is consumed excessively in one occasion, but it won’t be too dangerous if taken in small quantity every day.

Low-Carb or Zero-Carb, these words are lately often being used in commercials and are targeted to dieters. Technically, this is true because straight liquors are not distilled and that is why it contains no carbs. However, it still has lots of calories, without nutrient value added.

Alcohol can reduce your inhabitation capability. If you are not in a sober condition, you tend to make wrong decision such as the reluctancy to say ‘no’ when offered with foods that contains rich calories. A friend often offers something to you to eat, by saying ‘just one bite more’, ‘come on, just do it for tonight’ or ‘don’t worry, you’ll be perfectly fine’. These words will definitely make you break your dieting rules.

During the dieting program, the main focus is how to reduce the body fat without disturbing your body’s metabolism. This process will run smoothly, if you can avoid consuming alcohol too much. Why? It is because when the alcohol enters your body, it doesn’t need to be digested, it goes into your stomach and then reaches your liver and brain in minutes. Hereafter, your liver will be totally focused in the process of metabolizing the alcohol and the immediate impact is that carbs and fats from your food will be directly stored as normal fat, this is because of your liver has no time to process them. The fat will be passed to the fat layer and stored at your body permanently.

The story is different if you consume only food. When carbs and fat enter your body, they go to your stomach and will be digest better, and as the result more of them can be converted into energy.

Water is very important for our life. It helps the digestion process and the energy burning process in your body as well as to support the kidneys performance. Can you imagine what happens if your body loses water significantly? The dehydration symptoms would be bad. One effect of alcohol consumption is that you may likely fall into a dehydration situation. In addition, you will lose important minerals such as, potassium, magnesium, calcium and zinc from your body. When it happen, your liver will work extra hard because it needs to support to your kidneys in the event of dehydration. This is the reason why fat cannot be processed well by your liver when you’re drunk. Dehydration will make you feel dizzy, so it is not suggested to consume a large amount of alcohol since it can be dangerous for your body.

If you are consuming alcohol in a regular basis, then don’t stop it right away, because the withdrawal effects might be hard for you. You should do it slowly and try to substitute harsher liquors such as vodka and whiskey with milder one, such as wine. Dr. Atkins suggested that the most diet-friendly alcoholic beverage is wine, if possible mix it with seltzer, tonic water, or diet soda to further reduce the overall alcohol intake.

The success of your diet program fully depends on your decision. You may take the risk by drinking a large amount of alcohol and face the impact afterwards, or decide to avoid it for your own good, for your healthy body and for the rest of your life.