When you were around 13, depending on just how liberal your upbringing was, you may remember having a talk about ‘the birds and the bees’ which was something of a euphemism it turned out for bumping uglies. If to this day, you remain disappointed that you never actually learned about birds of bees, then you’ll be pleased to know that this is about to be put at least half right as we discuss the reproduction of honey bees.

If you’ve ever wondered why bees swarm then the answer is that this is their natural means of reproduction. When a queen bee leaves the colony, it takes with it a large swarm of worker bees and this tends to account for around 60% of those bees – sometimes thousands to tens of thousands and this is obviously quite an impressive but dangerous site to behold. Usually this will occur during the spring though it can happen at any time. In some cases an ‘afterswarm’ will occur afterwards at which point many other bees, with one or a few virgin queens, also leave the old hive. Sometimes this will occur multiple times until the hive is completely empty. It is important here to understand that entomologists consider bees not as individual organisms but as one ‘superorganism’ which must work as a unit. 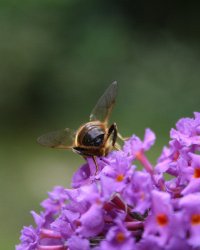 At first the swarm will not fly but will rather gather at a nearby location on a branch somewhere. Around 20-50 scouts will then be sent out in order to find a new nest location. Once a scout finds an area they are ‘excited’ about, they then begin a ‘waggle dance’ to attract the other scouts. The more excited they are, the more vibrantly they will dance, and this will then cause others to come and assess the area. This process can take days and the bees use collective intelligence to decide together on the best location. This requires an area to be the right size and well sheltered from the outside world.

The queen bee will then embark on a ‘mating flight’ during which time several drone bees will mate with the queen. This is the primary role of the drone bees, who have larger eyes in order to facilitate mating in flight. After intercourse the bees will die due to the process tearing apart their penis and abdominal mid section.

Often when the queen decides to swarm this will be partly because she is ageing, and when she leaves she will leave behind a virgin queen in their stead. Here mating will continue which will take place in specified chambers within the hive. Interestingly during intercourse the bees serve various roles – both to fertilise the eggs of new queens, and to extend and multiple the fertilised eggs into millions of identical eggs.

Laying worker bees meanwhile serve another role – to lay unfertilised eggs to be fertilised subsequently. These eggs will only develop into drones, and a hive cannot survive with only laying worker bees – requiring at least one queen bee. The term queen bee is usually used to refer to the mated queen of which there is usually only one, while there may be several virgin queens below them. The queen bee themselves are larvae like any other worker bees, but are selected and specifically fed in order to develop into sexually mature queen bees.