Coughing is a reflex to clear partially obstructed airways and throat. Although repeated coughing is annoying, it is often important to protect yourself and eject unwanted materials. Coughs can be chronic or acute. Chronic coughs often last for more than two weeks. On the other hand, acute coughs last for shorter duration.

If you smoke a few cigarettes each day, your lungs and air passages are contaminated by foreign, unwanted chemicals. When you inhale these chemicals, your body tries to eject them by coughing. The infamous “early morning cough” that affect smokers is caused by one unique reason. On normal people, small hair-like formation (cilia) that lines the airways can sweep unwanted materials out of the lungs with outward movements. Unfortunately cigarette smoke decrease the sweeping movement, as the result some of the toxic substances remain in the lungs. When you sleep, cilia regain some of its effectiveness and it begins to work again, this is the reason why you cough in the morning. Your body is trying to clear away toxic materials that are accumulated the previous day. 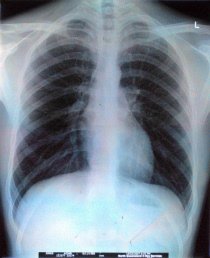 Unfortunately decades of heavy smoking can permanently impair cilia’s ability to clean your respiratory system. As the result, you’ll be more vulnerable than before to other contaminants, such as bacteria, virus and other pollutants. This will make infection and irritation more likely to happen.

At this stage, the noxious chemicals will accumulate steadily, causing some serious conditions such as emphysema, bronchitis, pneumonia and lung cancer.

Emphysema happens when many alveoli (air sacs), where carbon dioxide and oxygen are exchanged, in the lungs are destroyed. Prolonged exposure to tobacco smoke can cause the alveoli wall to become fragile and thin. This is an irreversible damage and if the person continues to smoke, many alveoli will be punctured and completely lose their function. This will result in less efficient lungs, due to lower oxygen/carbon dioxide transfer rate, which can cause shortness of breath. Because the lungs are also less elastic, heavy smokers often find it more difficult to exhale.

Bronchitis is the bronchi inflammation, which causes swelling of the bronchial walls and excessive mucus production. On people with constant, instead of occasional, smoker coughs, it is likely that the mucus layer has thickened to the point where the airways are narrowing noticeably and normal breathing is difficult or impossible to do. Because at this stage, the cilia are likely to be already damaged permanently, the thick mucus layer becomes a fertile breeding ground for bacteria, making infection happens easily.

When left untreated, the infection on your bronchial wall can cause additional damages to respiratory tract. In this case complications such as pneumonia or even total respiratory failure can happen.

Smokers are continuously exposed to toxic substances, which make viral infections more likely to happen. Both are common causes of lung cancer.

This term is often used to describe both chronic bronchitis and emphysema. In the United States alone, more than seven millions people have COPD and it is fourth leading cause of death. Although, smoking is the primary risk factor for COPD and many men smoke, more women died from this disease. On the most severe case of chronic lung disease, patients continuously gasp for breath, causing a drowning sensation.

The best and the only effective way to stop smoker’s cough are to eliminate the root cause, tobacco smoke. For many smokers, the incessant cough can be embarrassing, it can annoy others, interrupt conversation, cause muscle pain and spread germs. Smokers who have chronic cough should immediately see a doctor, as it could be caused by a separate respiratory disease. Within three months after quitting, the cough will begin to disappear on most patients.

While attempting to quit smoking, it is advisable to perform aerobic exercise regularly. The rapid breathing can help to increase the air intake and output; and it’s essentially similar to coughing. After an intense exercise, the mucus is slowly expelled from the trachea to the mouth. After 30 minutes of intense exercise, phlegm can be ejected more easily. Due to reduced lung efficiency, the first week of exercise can be challenging, perhaps more than most smokers are willing to do. In most cases, after a few days of exercise, smokers will experience a noticeable increase in coughing and ejected phlegm. It happens because phlegm is loosened and pushed to the mouth. You should spit the phlegm out as your body is trying to remove it. When combined, a complete cessation of smoking and regular exercise can eliminate coughing in two weeks.

Once most of your phlegm is released, you’ll only cough a little, in addition, your cilia will start to do its work. If you’re in the process of quitting smoke, you should continue the exercise, because if it ceases, the phlegm will build up to the former state and your cough will return in full force.

In addition you can try a number of natural treatments, while you’re quitting smoking and exercising. These methods can help to detoxify your lungs and remove impurities:

• Boil mint and eucalyptus leaves, breathe in the hot vapor to thin the mucus.

• Add some salt with warm water and gargle. It will soothe the cough and take out the phlegm more easily.

• Drink at least 64 oz of water each day. Water is a basic thinning agent and can reduce pain associated with smoker’s cough.

• Take throat lozenges, they decrease the cough severity and increase the saliva production.

• Coffee and alcohol can dehydrate your bronchial wall and worsen you coughing. Switch to hot tea or simply water, during the treatment. Hot tea mixed with honey can soothe your throat and reduce coughing. You can add a tablespoon of aloe juice on your tea if your throat is scratchy.

• Prop your head with a firm pillow, so your head is slightly elevated. When you lie flat, mucus will collect in your throat, causing severe cough.

• Use humidifier in your bedroom. Dry air can aggravate your coughing.