A lot of kids do not like going to school very much. There are plenty of reasons for that: whether it is because they have an exam and they did not study for it, or homework that they have to turn in which they did not do because the night before they went out with some friends, or maybe they want to avoid an ex-girlfriend or they are getting tired of bullies beating them up and shoving them in the lockers. Whatever the reason, kids will go through a lot of trouble to avoid going to school, especially when the alternative is staying at home and playing video games.

There are plenty of adults who go through the same situations when they want to avoid going to work. Sure, they might not have to worry about a bully stealing their lunch money, but they can have an annoying supervisor or a boss whose power went to his head. Same as the kids, they can also have some work over the weekend needed for that important account that they couldn’t be bother to do because they went out with their friends. Whether you are 15 or 30 years old the most common technique to stay at home remains the same: pretend that you are sick. Even though some are content with just coughing a lot and faking a sneeze or two in order to convince their parents that they are sick, others will go through elaborate and risky methods of faking an illness. Not surprising is the fact that those kids that reach new lengths in doing what it takes to stay at home are the ones with the most experience, but also with the most skeptical parents.

Ways to Fake an Illness 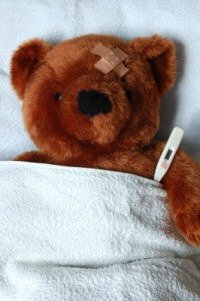 The best way to convince someone that you are sick is to fake a fever. Even though most parents use this method often and consider it very reliable, it is in fact easy to fake. A good way is to take a bottle full of hot water and keep it pressed to your forehead before your parents come in to feel it. When they press their hands to your forehead it will be hotter than usual as the bottle will have raised your temperature a few degrees. Another way is to bury your face in the pillow and start breathing heavily. After the pillow is warm place it on your forehead. Again, it will raise your temperature in that area by a few degrees.

Remember that this routine will require a bit of acting. Complain about your symptoms, but try not to overdo it. Nobody likes a showoff. Throw in a few coughs and sneezes from time to time. Try to act as normal as possible during the entire show. If you want to pull something like this off, you have to really commit. Act sick throughout the day, even when you think that nobody is watching or hearing you. Make frequent trips to the bathroom. That will help with the illusion of being sick. And as not to make it obvious, do not suddenly get better when school is over and it is time to meet your friends. If you chose to go on this path you will need to make a few sacrifices. A day off from school should mean a day off from going outside to meet your buddies as well. You can call your friends to talk. Act like you are concerned about what happened at school that day, but again do not overdo it. You do not need to impress anyone.

For situations when you are already at school you can use the same tactics on the school nurse. However, she sees a lot more kids pretending to be sick then your parents, so she will take a little more convincing. Your track record and reputation with this type of thing will be a huge factor in determining whether you pull it off or not.

Ways to Trick the Thermometer

If you have trusting parents then a few coughs may be all that is needed. However, most parents will resort to their sure fire method to tell if their child is sick or not: the thermometer. This instrument can be an ally or a foe, it is up to you. There are plenty of tricks used to raise the temperature of the thermometer. It is up to you to decide which ones work best.

One easy way to do this is to simply hold the thermometer tight in your hand and use your thumb to rub it repeatedly until you reach the desired temperature. For those that are already a little sick they can keep a laptop on their stomach for an extended period of time to give them an extra two or three degrees.

A good method for trusting parents is to convince them to let you go to the bathroom with the thermometer. Act like you are about to be sick. In there keep the instrument under running hot water until the desired temperature is reached. Make sure not to overdo it. If the temperature is too high you might end up in the hospital for no actual reason. If it passes its mark just keep it under cold water for a little while until the temperature goes down. Then just put it in your mouth and walk out of the bathroom.

If you can’t take the thermometer with you in the bathroom just go alone and drink a lot of very hot water then come out and let them take your temperature. Sure, this method will hurt a little, but you know the saying: no pain, no gain. Another great way is to keep the thermometer next to a light bulb until it starts increasing in temperature. However, this method requires that you are alone with the instrument as well.

Again, successfully faking a fever is a tricky operation that will require practice and experience. The most important thing is to not overdo it. It is better that your parents think that you are just a little sick and would like to stay home than for them to think that their child is deceiving them. Always watch when you are using a trick to raise the temperature of the thermometer. A little negligence and that thing will show that, from a medical standpoint, you should be dead or at least in a very serious condition. This will cause your parents unnecessary worries which will lead to an eventual punishment for you when they take you to the emergency room for nothing. Sure, in theory this way will also let you skip school that day, but the consequences show that it is not really worth it.

Also, there are some methods that are still popular that have shown to be not very effective. Sticking a thermometer in the microwave will quickly ruin it. The same goes for putting it inside an oven. It might raise the temperature, but it will all be very hot and it might crack. Hiding a penny under your tongue is also hit or miss, not to mention incredibly unhygienic. There are plenty of other tried and true methods to get off school. Use one of them and you might just succeed.