Fainting is often portrayed in cinema and TV as being a comical event – where the individual will suddenly collapse in a flamboyant fashion as a result of shock, fear or surprise only for the audience to laugh.

However in reality it can be an unpleasant sensation and even dangerous under the wrong circumstances – particularly if it causes you to fall and hit your head. It can also be something of a puzzling experience if you don’t understand precisely what it is that has caused you to faint, and this can make it harder to avoid it happening in future.

Here we will look at what fainting is, what causes it, and how to avoid it. 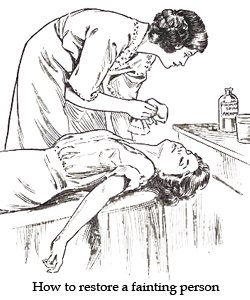 Fainting (also known as ‘syncope’) is characterized by a sudden loss of consciousness, and this is caused by a lack of blood flow to the brain – rather than as a result of trauma. Normally the patient will wake up very briefly after collapsing but will usually experience confusion and potentially nausea in the wake. Other symptoms include dizziness, limpness, cold sweat, whiteness and blurred vision.

It is important for those around the patient to help them down gently and avoid injury, and then to allow them to lie flat until they come around. More important is treating the cause of the fainting and teaching the patient how to manage it.

Most fainting is caused by the vagus nerve – the nerve which connects the digestive system to the brain and to maintain blood flow to the gut. This vagus nerve will direct blood to the stomach and intestines whenever food enters the body and it will recruit this blood from elsewhere. In some cases – when we faint – it can be over excited and take too much blood from the brain to the gut and thereby result in the brain being short of blood and thus ceasing normal function. The body returns to normal quickly as the vagus nerve stops acting as soon as the patient loses consciousness.

Fainting then is most likely to occur when the vagus muscle is working hard to take blood there – which occurs when the body has a bowel movement, or during vomiting. Sudden drops in blood pressure can also increase this effect.

As mentioned however, low blood pressure can also cause fainting and brief losses of consciousness. This is because the pressure in the blood isn’t enough to allow the heart to push it upwards causing it to run out of the brain. Those with low blood pressure might experience dizziness and fainting when they suddenly stand up.

Dehydration can lower blood pressure and also stimulate the vagus nerve so a lack of hydration makes fainting most likely.

When we faint due to a lack of blood to the brain, it is not actually a lack of blood per se that is causing the problem, but rather a lack of oxygen which is normally contained in the blood. When this oxygen level falls below a certain level, this can then cause you to pass out as the brain is starved of energy (oxygen is used by the brain in order to utilize glucose). This is what makes it possible to cause yourself to faint through hyperventilation or holding your nose and blowing outwards (however it is not recommended that you try it as it can kill brain cells).

Shock, in its medical sense, is a life-threatening emergency that can occur due to blood loss or severe allergy via a suddenly lowered blood pressure. This causes fainting like symptoms – though technically they are not called ‘fainting’.

If your heart rate is too high or too low then this can interfere with its ability to pump blood to the brain and cause fainting for that reason. Check your heartbeat and if it is less than 50bpm or more than 150bpm then this maybe the cause (also look out for chest pain).

So why does all this mean that you faint when you see blood? Or get told very bad news? Well shock, fear, surprise and disgust can cause fainting via an interplay of effects. For instance they can stimulate the vagus nerve (ever noticed how very bad news can make someone vomit?), they increase heart rate dramatically due to the release of adrenaline, and they can cause a drop in blood pressure. All of this means that a sudden bad news can cause some people to go white as a sheet and pass out. This is particularly likely if you are dehydrated, have a sensitive vagus nerve, or have low blood pressure.