Anxiety takes many forms – from an inability to eat in public, to difficulty speaking up in groups. One particularly awkward form that it takes for many men is the ability to pee in public. Of course no one likes to urinate in front of other people, but when it’s in a public toilet then this is something that men pretty much have to do, and something that can be quite a stress – an inability to pee in public means that you can go whole evenings feeling uncomfortable, or stand for ages in front of a urinal with nothing coming out. 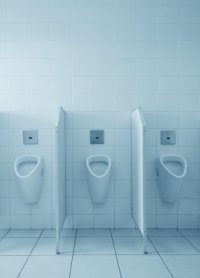 I’m going to write this article in first person, because this is actually something I have personally experienced as well as having learned about treatments when I did my degree in psychology. There was a time I was a nervous pisser myself – and I would excuse myself in a pub or a restaurant and stand there failing to urinate for a five minutes before quite often actually giving up and leaving having not gone to the toilet at all. Of course I couldn’t then very well get up and go again two minutes later as my mates would think I had a screw loose or was up to no good – so I would have to hold it for another hour at least before I could go again. It was no way to behave, but fortunately learning about CBT as well as anxiety disorders in general during my degree meant that this was a problem that was gone by the time I hit my twenties and I can now pee freely at the drop of a hat in any given situation. I’ll share the secret with you hear so you don’t have to sit through a four year course to cure the problem…

All these anxious behaviors are caused by the same thing – by ruminating on the subject and gradually starting to have irrational thoughts. Here is the internal dialogue I would have with myself:

‘I hope this hurries up’

‘It’s now been ages and I officially look strange’

‘People will think I come in here to check out men’

‘I must now fake peeing as it’s still not happening’

‘Now fake a shake, zip up and leave!’

So in my head I was actually worried that I was being judged for taking too long. The irony was that it was my fear of taking too long of course that meant I couldn’t go. It was a self fulfilling prophecy – I was so busy worrying that I couldn’t concentrate on peeing.

I could also trace this back to a starting point – or rather two catalysts that both occurred when I was in primary school. The first was the very first time I used public urinals after my class were upgraded to ‘big boy toilets’. I had never used them with my parents as I had always gone to the loo with my Mum (hey I was like four!). So I went in there, stood at the urinal and pulled my trousers down and everyone laughed. Pretty embarrassing.

That passed but then there was another problem – the irritating habit of children in year 1-4 of pushing you while you were using the urinals so that you would have to put your hand out and touch the wall and probably get your trousers and shoes wet as well in the splash fiesta that would obviously follow. These two incidences meant I was probably a bit overly sensitive to what others were doing and thinking when I should have been minding my own business, and the nature of the human brain meant that this eventually gained momentum until I could barely pee in urinals at all and had to pray that there was a cubical free.

This is what they teach in CBT – or ‘Cognitive Behavioral Therapy’ as it’s known – to listen to the contents of your own thoughts and identify the negative thoughts you are having that are causing the problem. It’s highly popular over here on the NHS because it’s cheap and only requires the patient to follow a set of instructions – they can even do it at home through an e-mail account.

What you then have to do is to replace those negative thoughts with positive ones that will dilute the problem – almost like you are reprogramming your own mind. These don’t have to be ‘positive affirmations’ such as ‘I can do it – I was a born pisser’, but rather just a more logical and gung ho look at the situation.

Fortunately for me the way I first got over it was to make one realization: most of the time I was peeing in public it was in a pub or club. And that meant that most people were drunk – visa-vi they were not looking at me and certainly not keeping tabs on precisely how long I’d been in the loo. So I would just think to myself as I stood there ‘they’re all drunk and not looking, they’re all drunk and won’t remember’ – and this worked a charm.

This lead to other positive thoughts – such as the fact that several people have the problem and a good percentage of the people in there would be sensitive to my plight and so wouldn’t judge. And anyway I might have a condition that makes peeing hard and that’s perfectly acceptable.

And then the big breakthrough – if they think I’m hanging out here to look at their nobs… so what? I’m not going to see them again, they don’t care about me and I don’t care about them. Today those thoughts have overridden the old negative concerns permanently so I don’t need to make a conscious effort to think them. However at the same time if I ever do come across a hiccup I just pick one and think it ‘who cares how long I take a piss? Seriously… ‘.

The reason these worked so well though isn’t just because I repeated them often enough. I was also aided by the simple fact that what I was thinking was believable. I was thinking ‘they’re drunk’ in a pub… and they probably were.

You know logically that people aren’t looking at you when you wee and don’t care what you do, but you probably don’t feel it. So try manning up and testing the worst case scenario – go in there when you don’t need to wee and stay there for twenty minutes. What you’ll notice is how no one says anything to you about it, and how there are absolutely no negative consequences. Once you’ve seen the worst that can happen and realized it’s not that bad… then you’ll be fearless.