Road rage is one of those things that a lot of us laugh at and think of a fun character quirk if anything. However in reality road rage it no laughing matter and can actually be dangerous. Certainly it is an unpleasant and unattractive trait and one that we should seek to eliminate. Here we will look at road rage, why it’s a bad thing, and how you can go about alleviating it.

When we’re in the car we are in our own property, separated from the other drivers on the road, and seemingly from the reality outside. It’s easy to start feeling a little detached from the outside world and as though what you do in your car won’t have any consequences in the real world.

However the reality is that when you are driving you are in command of a powerful and dangerous vehicle – capable of traveling at very high speeds and causing a lot of destruction. You are in a position of a lot of responsibility and what you do can have huge implications in the real world. Driving angry is highly dangerous and it can cause us to make errors in judgment or to drive aggressively which can result in serious accidents that risk our lives and those of others. 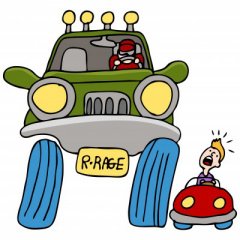 At the same time, the people in the other cars may be separated by a sheet of glass, but they are still very much real people and there’s nothing stopping them from lashing back at your harsh words or gestures by stepping out of their car and becoming physically aggressive – or from using their car as a weapon. Sure you’re angry, but that’s no reason to create other angry drivers too and many fights start this way and end badly.

But apart from anything else, being angry in the car is simply not constructive – you might think that by being angry and punching doors you can make yourself feel better – but in the long run all that will happen is that that anger will place a strain on your body, and will eat at you for a long time afterward as you ruminate one what you should have done differently or why they are so much in the wrong. If you get angry then they’ve won and it will affect your health and your concentration/happiness for the rest of the day. So learn to let go…

The number one way to let go and stop being so angry is simply to realize this. You need to change your thinking, and the way you think about driving and road range in particular. When you realize that being angry is not going to benefit you or get them in anyway, then you realize that the more they get angry at you and the calmer you remain the more you’ve won. Laugh it off, realize it was a mistake, and then take some solace in the fact that they will be no doubt ranting and raging for hours to come. You’ve ruined their day already clearly so there’s no reason for you to get upset about what transpired.

At the same time if they are angry and raging like this it is a clear sign of pettiness and it does suggest that they have their priorities very wrong or are having a bad day in general. It’s their problem, so just relax.

And if you’re angry because what they did was very wrong – if they pulled out in front of you or drove through when it was your right of way, then just realize again that it doesn’t matter. Worst case scenario they’ve delayed you by two minutes and if you just relax and enjoy being in the car then it doesn’t matter. There’s nothing you can do to speed things up now, so the only thing you can do is learn to let it go and carry on with your life. If you really want ‘justice’ then just remember that they will a) actually get there slower and use up more petrol by driving so aggressively, and b) probably either get into an accident or mess with the wrong person who will ensure they do get their comeuppance. It’s not your problem…

This changing your thinking approach is fresh out of ‘CBT’ or ‘Cognitive Behavioral Therapy’ – a school of psychology that states that the best way to combat psychological problems is to alter your inner voice and the way you react to stimulus.

However sometimes that is just easier said than done. Unfortunately the car is the kind of place that makes it very difficult to keep a level head and to compose ourselves because of the range of unhelpful factors that are all working to get our heart rate up. In a car it’s hot, it’s claustrophobic, you’re often in a rush, and you’re driving fast which will elevate your heart rate. All this means that then when someone flips us the birdie it’s hard not to completely flip out. Following then are some methods you can use to help calm yourself and counteract some of these factors.

Have the Air Conditioning On

The first and most simple way to make yourself calmer is to prevent yourself from being too hot. Being hot will aggravate us and make us angry, so by opening a window or turning on the air con we can help ourselves to cool off literally and figuratively.

Stuck in a traffic jam? Feel your heart rate rising? Well then try breathing calmly and fully exhaling and inhaling each time. Focus on this breathing and try not to think about what’s going on outside, you’ll find this lowers your heart rate and calms your mind.

Caffeine is a stimulant, so that means that it speeds up the metabolism resulting in a faster heart rate, elevated blood pressure, hotter body temperature and more anxiety. Drinking a mug of coffee before getting stuck in a traffic jam is not a good combination.

When we’re in a hurry everything seems a lot worse and being slowed down can seem quite distressing. This is because we’re often in a hurry and we are in fact more anxious than angry but take our frustrations out as rage. Leave time before you need to be at your destination then and any little delays will be water off of a duck’s back (you’re the duck… ).

Calm music can also help to relax and helps to slow the heart rate. Choose a chill-out CD and have this playing and it gets very hard to be overly angry.

Adapting to the situation and making the most out of being slowed down can be a great way to avoid yourself getting angry – especially if you’re stuck in traffic. If you find yourself in a long jam, use your hands-free and catch up with your correspondence – then that’s one less thing you need to do when you get home rather than being a waste of time.

Investing in a good car that’s comfortable, and then taking the time to keep it clean and pleasant inside can help to make getting stuck in traffic less of a blow. Our immediate environment has a big impact on our moods, but at the same time it will have that effect of making you think ‘they’re raging in their Skoda, but I’m nice and comfortable in my Aston Martin… no wonder they’re angry… ‘.