The symptoms are usually tingling, numbness and/or burning of the throat, tongue and lips that begin within 15 to 30 minutes of ingestion. Paresthesia often spreads to the neck and face and sometimes to the toes and fingertips. It may be followed by muscular weakness on the lower and upper limbs and on more serious cases, patients may also have ataxia, dysphagia and dysphonia.

Paralysis can happen in less than 12 hours and won’t disappear until 3 days. Victims may feels drowsiness, weakness, sensation of floating in air, intense thirst, throat tightness, salivation and headache. Temporary blindness, tachycardia, diarrhea, vomiting, nausea and diaphoresis may also occur. This condition can be fatal if respiratory muscles are paralyzed. If the victim survives the attack for 12 hours, then the prognosis is good. The illness duration may happen for a few days, but muscular weakness may persist for weeks. 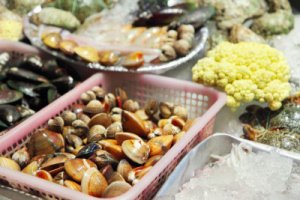 Diagnosis is usually based on recent ingestion of shellfish and characteristics symptoms. At this moment, there is no reliable lab diagnostic test for PSP victims. However, suspect food can be tested as supportive evidence.

Some experts advocate gastric emptying as an early treatment, while activated charcoal can block additional toxic absorption. Ventilatory support and airway management is the primary treatment methods and can be essential in saving patients’ life. Unfortunately, this treatment may not be able to prevent death if large amount of toxin is ingested. To correct possible acidosis, intravenous administration of sodium bicarbonate and renal excretion of toxin are often performed. The toxin elimination process has a half-time value of 90 minutes, and if everything goes well, the toxin concentration can be reduced to a relatively harmless level in nine hours. There are currently no antidote for PSP, but there are some promising results with the administration of 4-aminopyridine. Most of PSP incidents happen when clams and mussels are gathered and consumed by recreational collectors. In all cases, the fatality rate is just under 10 percent, however, in developed countries it can be as low as 1%.

The first recorded case of PSP occurred in 1793 at Canada. Alexandrium catenella was believed to be the actual culprit. Occasionally, bivalve mollusks such as oyster, clams and musseld store STX, a complex form of neurotoxin that is produced by A. catenella, an algae. STX is a water-soluble alkanoid and among the most deadly neurotoxins known. There are currently about 20 analogs of STX known and a shellfish may contain a mixture of a few STX analogs. The composition of STC depends on the nearby algae species, type of surrounding marine animals and geographic area. Biotransformation of STX can generate a more dangerous form of toxin, and the degree of toxicity is determined by the net charge. About 150 µg of STX can cause moderate symptoms in most adults and fatalities can occur when the amount is higher than 0.5 mg. Normal boiling and steaming won’t inactivate STX, however high temperature processing used in canning process can reduce STX concentration substantially.

In the US, A. tamarense and A. catenella are the dominant cause of PSP. A. catanella is the dominant cause of PSP outbreaks in the West Coast, while A. tamerense is more commonly found in the East Coast. When the dinoflagellates bloom, the surrounding sea water may have a reddish-brown or red discoloration. The PSP outbreaks may occur a few weeks after the “red tide”. So, it is advisable for recreational collector to consult with the locals about the likely period of “red tide”. However, some Alexandrium species are relatively harmless and a red tide is not always caused by toxic algae. To complicate matters, shellfish can still become toxic even when there is no red tide nearby. STX won’t persist in the shellfish continuously, for example mussels may only be dangerous to eat for a few days after the beginning of the red tide. Oyster and clams may not be as toxic as mussels, however, although it takes more time for them to accumulate a dangerous amount of STX, it also takes a longer to cleanse STX from their tissues.

However on several clam species, such as the Alaska butter clam, it isn’t safe for consumption once contaminated by algae toxins. You should be aware that sea scallops can also accumulate high amount of toxins even when there are no algal blooms nearby. However, their adductor muscles are relatively safe for eating. Gastropods such as abalone can also accumulate high amount of STX and in Spain it can reach as high as 44 ppm. STX is also detected on some crabs and rock lobsters, but it usually doesn’t reach a harmful level. STX is likely to accumulate in fish gills, liver and intestine of fishes around the red tide, but usually not in muscle.

Unfortunately sea products contaminated with STX can’t be detoxified by common depuration methods and often the only way is to stop the fishing or gathering activities for a few weeks or months after algal bloom (red tide). In general, shellfish contaminated with STX tastes and looks normal, while common cooking methods have little effects. One of the more effective ways to prevent shellfish poisoning outbreak is by establishing a monitoring program on places where algal blooms regularly occur. When toxic algae are present at large number in an area, it is important to perform daily tests before sea foods are released to the market. As illness can occur on after an ingestion of STX as little as 120 µg, and death at about 300 µg, obviously, regular tests are necessary. Local public health agencies should also inform the community about the danger of consuming shellfish during specific times of the year. Additionally, STX is water soluble, so just by consuming the broth, people can still have poisoning.