Every culture has a different set of standards when it comes to things like marriage and the relationships between men and women. When it comes to Russian marriages, you will be looking at several days of festivities as this is considered one of the most sacred ceremonies among the Russian culture. There will be celebrations lasting for a minimum of two days, that being the typical time period for the reception itself.

However, one thing that differs greatly about Russian marriages is that unlike other cultures there are not a lot of religious undertones. A marriage is basically recognized as the joining of a new socialist family. However, the people who participate in the ceremonies are sure to thoroughly enjoy the affair. 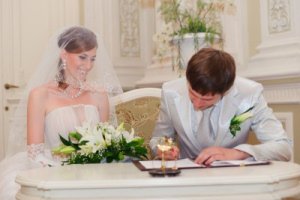 When a Russian couple decides to marry there is no long period of engagement as with some other cultures. Generally speaking the very first step in getting the union underway is to go down to the Dept of Registration of Civil Statuses and fill out a registration to join in union as a married couple. At this point they can also book things like photographers and musicians and other people such as caterers to help host the festivities. Usually the minimum wait time for the performance of the actual ceremony is about 30 days. In fact, many couples actually camp out outside the ZAGS office in order to ensure that they can get a first place in the long line the following day.

The witnesses are typically the best friends of the couple. Much like a best man or maid of honor would be at an American wedding. What generally happens is that these witnesses put together a series of tests for the bride and groom. This is often referred to as the Ransom. Some sort of barrier is usually set up on the hallway or stairwell and then a variety of questions will be asked of the groom, such as what her favorite flower is or her favorite color and so forth. If the groom should answer any of the questions incorrectly then at this point he is to bride the witness to allow him to pass. This is a rather exciting event and one that most find quite amusing and fun.

In most cases the ceremony is done at a civil level and only the closest friends and family of the bride and groom attend. This is done very briefly with the exchange of a few wedding vows and the placing of the rings. If however a couple does desire to have a large church gathering then the registry signing is typically done several weeks in advance. The actual ceremony usually occurs right at the ZAGS office or possibly as a “Palace of Marriage.” The guests generally arrive in gorgeous cars that have been decked out specifically for the occasions. The officials who perform the actual ceremony are required to take some sort of drama refresher course each and every year to ensure that they will conduct a moving and memorable ceremony.

Progulka (Tour of the City) 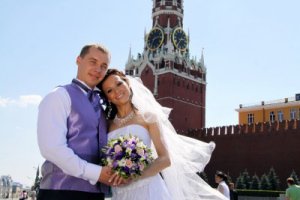 Once the ceremony is over then the wedding party generally embarks on a detailed tour of the city, visiting the most historical sites and the married couples place flowers on the graves of war heroes. This is done in order to symbolize the gratitude they feel for the sacrifices the soldiers made. In some cases the married couple will also release a group of butterflies or dives in commemoration of their new lives together. One of the most symbolic and possibly the best part of the releasing of the doves is that the bride will commonly tie a pink ribbon to the neck of one dive while the groom ties a blue one to his. As they watch the doves fly off, the dove the soars the highest is said to be indicative of what the gender of their first child will be.

After the progulka has been finished then the wedding party will make their way to the reception hall where the real fun begins. This will mark the beginning of at least two whole days of doing nothing by eating, drinking and partying in celebration of the new marriage. The couples will usually be given a loaf of bread in which each will take a bite. When this occurs, the person who takes the largest bite will be the one who wind up ruling the household or to put in in western terms “Wear the pants in the family.” After this custom has been completed then the master of the ceremony or the “tamada” will welcome all of the guests and lead in the initial toast. After this the crowd will generally chant Gor-ko!, which is the Russian term for bitter. This of course implies that the wine is so bitter that the couple must sweeten the deal by kissing for as long as possible.

Russian weddings are a lot of fun and anyone who has ever attended one already knows that. If you are ever faced with the opportunity to attend a Russian wedding then by all means do not turn it down. It is an experience like on you have probably never had.