Snake oil is a preparation that comes from the Chinese water snake and which is used widely in the treatment of joint pain. This is an ‘alternative’ treatment for arthritis and similar conditions, and one that has gotten a bad name for itself and become synonymous with phony medications and in fact all bogus products. If someone describes something as ‘snake oil’ then this is essentially a colloquialism for something that won’t work. This of course doesn’t bode well for the efficacy of snake oil, but here we will have a look at whether there is any merit to it.

How Does Snake Oil Work? 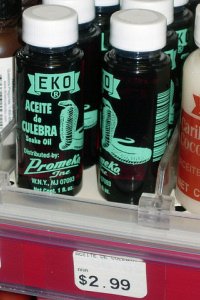 Originally snake oil came from China and was known as shéyóu. Here it was used as a remedy for inflammatory pain and particularly joint pain. It is still used for this purpose today. Elsewhere however it has been used for many other purposes – such as a cure for male pattern baldness in ancient Egypt when mixed with lion, hippopotamus, crocodile, tomcat oils and Nubian ibex. The reason it widely believed to be effective is that it contains more eicosapentaenoic acid (EPA) than any other sources.

The exact ingredients of most snake oils you would buy today vary greatly, but would tend to be around 75% carrier material, and 25% oils from Chinese water snakes which would consist of the aforementioned EPA which is an omega-3 fatty acid, along with myristic acid, stearic acid, oleic acid and linoleic acid.

Omega-3 fatty acids have long been believed to be effective in treating joint pain and are used by doctors to treat arthritis. EPA can be absorbed through the skin, and is also responsible for the formation of series three prostaglandins which help to reduce inflammation. This would work like aspirin and would help to thin the blood and therefore could in theory also be used to treat high blood pressure. Likewise the fatty acids should also help to improve neurotransmission in the brain, and fatty acids are often praised for the positive impact they can have on the brain. Likewise they could in theory help to prevent Alzheimer’s and dementia.

On top of all this, the oil in snake oil could also be used to replace the oil in the skin making this a moisturizer and a treatment for psoriasis or eczema.

That’s the theory, but does snake oil actually work? Well that all depends on who you ask, and evidence has proven inconclusive. That said, the idea that it could help to reduce swelling and joint pain makes sense from a scientific perspective as long as the EPA is absorbed through the skin which is an area of uncertainty. It’s certainly unlikely that rubbing snake oil into your wrist will help to improve brain function as some sources claim, but it might just help with your arthritis – certainly if it’s cheap it doesn’t hurt as something to try.

In the past the problem with snake oil was that it was over hyped by peddlers who promised it would be a silver bullet for any ailment. This has given the snake oil a bad name, and unfortunately similar peddling goes on today as big companies promise unrealistic benefits while often not using the correct ingredients – several brands of snake oil don’t contain the Chinese water snake oil at all.

In conclusion the old peddlers of snake oil over hyped their product and mis-sold it – it certainly isn’t a magical cure. However that said, it’s also possible that the modern day reputation of snake oil may be a little unfair and that it may have some merit. So read reviews, read the ingredients and give it a go to make up your own mind. Meanwhile you can achieve similar results with cod liver oil tablets and aspirin.