The lingzhi mushroom, also known as ‘reishi mushroom’ (translating as supernatural mushroom) is a categorical term for many mushrooms within the Ganoderma genus. The term lingzhi is usually used to refer to Ganoderma Lucidum and Ganoderma Tsugae. G. Lucidum, which are used as a natural medication in East Asia and now across the globe. Its use in medicine dates back to over 2,000 years ago, which puts it as one of the oldest mushrooms to ever have been used medicinally.

There are many health benefits associated with lingzhi, and no known side effects, which makes it a highly popular alternative remedy. Lingzhi contains ganoderic acids which are similar in composition to steroid hormones. They also contain polysaccharides such as beta-glucan and coumarin as well as alkaloids.

As with many ancient medicines, there is some scientific research to back up the traditional usage of lingzhi. Here we will look at what some of those might be. 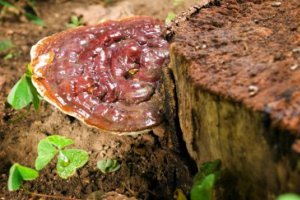 For instance lingzhi has been shown to have anticancer properties as a result of triterpenes which can prevent the spread of tumors. Polysaccharides are also known to help immune function and have cancer fighting properties too. In several studies lingzhi has been shown to help fight cancer in numerous other ways – for instance in an animal test ganoderma was found to prevent cancer metastasis.

Lingzhi helps to produce something akin to steroids. This means that it can help to trigger an anabolic state where the body rebuilds itself and grows muscle. At the same time it can also help to inhibit an enzyme which converts testosterone to dihydrotestosterone which leaves more testosterone in the body and makes it great for sexual function and muscle growth. This function has also implicated it in treatment of ‘benign prostatic hyperplasia’ or ‘BPH’ which causes enlargement of the testicles – as this has been connected to high levels of dihydrotestosterone.

Ganoderma has blood thinning properties and that means that it can be used to help treat high blood pressure and inflammation as a result.

The inclusion of ganoderic acid suggests that lingzhi can be used to help treat liver disease in humans.

As well as strengthening immune function in general ganoderma has specific antibacterial and antiviral properties and can help to combat HSV-1, HSV-2, influenza (the flu), stomatitis and more.

Because lingzhi contains alkaloids (consisting of nitrogen) and adenosine, this makes it a powerful vasodilator. This means that it causes the blood vessels to dilate allowing more blood, oxygen and nutrients to get around the body. This results in greater energy and more rapid healing. It also further reduces blood pressure.

Side Effects of Lingzhi

However there are some side effects of lingzhi which one needs to be careful of and these. Although lingzhi is generally considered side effect-free, it should not be consumed by those with a very low blood pressure, those taking other hypertension medications, or those going into surgery. While low blood pressure is a good thing, if it becomes too low, this causes dizziness and nausea and prevents the formation of blood clots which causes open wounds to bleed continuously. Consult with your doctor before using lingzhi and make sure that they are aware that you are using it before you go into surgery.

Further, while extra testosterone results in more drive, libido and musculature, it can also cause baldness and acne. Lingzhi increases testosterone in such small amounts that it is unlikely to have these effects. However if you do notice spots, it may be worth cutting out the lingzhi temporarily to see if that helps.

Finally, some people may experience allergies to lingzhi. If you have allergies to fungi or mold, then you should avoid using lingzhi.