The term ‘aphrodisiac’ describes anything that causes someone to become aroused and comes from the Greek Goddess of beauty ‘Aphrodite’. These aphrodisiacs can be foods, they can be herbal remedies, they can be scents or they can be sights – but in any case they have many uses in helping to get a man in the mood for sex and so can be used by their partners, or by the men themselves in order to help to maximize their enjoyment.

Here we will look at what some natural aphrodisiacs for me are that you can introduce into the bedroom, or into dinner before the bedroom, and that will ensure you both have a very good night.

Of course one of the biggest natural aphrodisiacs for men is sex itself, and when a man sees a sexual image he will automatically become aroused as an evolutionary response. Of course the precise sexual image that works most effectively will vary from man to man, and for partners it’s a matter of hitting on the right imagery in order to get them really worked up – and different men have different things that turn them on in this respect. If a man’s pupils dilate and he can’t stand up for a while, then their partner is doing the right thing. At the same time though, what works on one occasion might not be as effective as another, and like anything variation is key here. For women trying to get their men turned on though, the most effective way (and far more effective than anything you can put in their dinner) is to dress up in lingerie and stockings, to do their hair in a new and glamorous way, to wear to tall heels and to wear a striking lipstick. To start getting men in the mood early on meanwhile, women can try sending pictures to their men or sexual text messages throughout the day in order to build up the anticipation.

If you have tried mixing things up and dressing up in the bedroom and it’s no longer working as an aphrodisiac, then you should try experimenting with different things to find what it is that will really drive your man gaga. And never be afraid to ask – there’s a good chance that your fella has been waiting for you to ask him for a long time and he’ll be more than happy to give you some suggestions (though remember to tell him if you feel uncomfortable with anything). And don’t judge when he asks you to dress up as Princess Leia…

Red meat is a highly effective aphrodisiac as it causes men to produce testosterone. Testosterone which is also known as ‘the male hormone’ and which is responsible for men being hornier than women in the first place…

Alcohol is a tricky one. Beer will cause men to actually produce more estrogen and that means that it can actually work as the opposite of an aphrodisiac. Meanwhile because it dehydrates the body, kills brain cells and slows down the circulatory system (it’s a depressant) it’s really not going to be great for performance (in particularly a man’s ability to stand to attention) in large quantities. However in just the right amounts it can cause a man (or woman for that matter) to let go of inhibitions and to act more on impulse (it suppresses the higher brain functions). Furthermore it can also make people look more attractive – if you’ve ever heard of how beer goggles can make men attracted to women they normally wouldn’t be interested in, then imagine what it can do in cases where they already fancy you. Alcohol then is a great aphrodisiac but must be used sparingly to be effective.

If your man has a tendency to come home from the curry house wanting sex then you might want to place the blame on capsaicin – the substance in chiles that makes foods hot and spicy. This triggers the release of all manner of endorphins which create a cocktail of love… 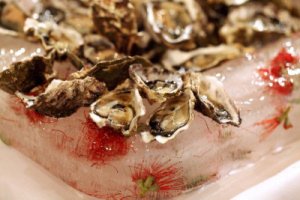 Oysters are the original aphrodisiac and are stereotypically romantic. This is due to their high zinc content and magnesium – two minerals crucial in the production of testosterone and that a man loses when he ejaculates. If your guy is still recovering from your last rampant session, then oysters can help him to replenish some of those substances lost.

Pasta is not an aphrodisiac as such, but it is nevertheless a key ingredient in your seduction – the reason being that it is a great source of complex carbohydrates which will release energy gradually throughout the night. While the alcohol and good food can have a sedative effect, you want your man to be able to still keep going into the night and pasta and other carbs can help to achieve this.

Raw garlic is a particularly powerful vasodilator. This means that causes the blood vessels to dilate meaning in turn that more blood gets around the body more quickly. This means first of all that your man gets more blood to his sexual organ – in other words he’s more likely to get and maintain impressive wood. Garlic will do the trick in any case, but raw garlic is most effective. To get this into a meal try grating some raw onto your cooking.

Chocolate, and particularly dark chocolate, will trigger the release of oxytocin – the hormone associated most closely with love. This then get him feeling amorous and lead to other things. At the same time though the strong taste and indulgence will make the occasion feel special and will put him in the mood for further indulgence.

Bringing it All Together

If you’re working on making a meal as sexy as possible for a man then the tip is to bring it all together and to combine elements. As the woman the most powerful thing you can do is to set the anticipation high by sending a naughty text during the day or promising a wild night. Choose your most elegant and sexy clothes and make sure that you’ve got some impressive lingerie underneath or a fun outfit waiting in the room. Next you want to set the mood with the right low level lighting and music, and then make sure to cook foods and share drinks that have strong tastes and smells. Don’t eat too much that you feel bloated, so think strong but small flavors – Italian food is always a winner. Then include a little alcohol to loosen the mood, and throw a few testosterone and oxytocin boosting chemicals into the mix to really get him in the mood.