Swimming is a big feature in many prenatal classes and has many benefits for those going through pregnancy. However a recent scare has brought the wrong kind of attention to swimming during pregnancy and caused quite a stir by suggesting that it may actually be a harmful activity that could damage the health of the unborn baby. Here we will look at the research and address the problems that swimming might cause, and we will look at whether these potential risks outweigh the benefits, as well as what other risks there are and how to avoid them. 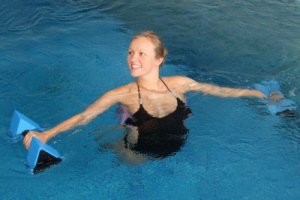 The controversy all kicked off fairly recently when the amounts of chlorine in swimming pools was officially measured. This number was far higher than the amount of chlorine in tap water and so much so that a swim would expose you to as much as 140 times as much chlorine as a ten minute shower.

Of course this is no accident – rather it is by design – as chlorine is used to kill bacteria and prevent the spread of illness in swimming pools. And of course exposing yourself to a swimming pool would mean you were exposed to more chlorine – apart from anything else you’re in there for longer and there’s water. However this did lead researchers to then question how healthy this would be and that in turn lead to questions regarding the health aspects of lots of chlorine exposure.

While chlorine is harmless in itself and in fact used in order to combat other health risks, it can also produce certain health risks that are not always so good for our health. For instance when chlorine comes into contact with sweat, skin or dust this can sometimes cause a reaction that creates the by-product ‘chloroform’. That chloroform can then be damaging to the health of individuals and particularly pregnant mothers as it is absorbed by the skin, gulped during swimming and inhaled as fumes.

However despite this possibility and the high amount of chlorine in pool water, there is nevertheless no evidence of a link between swimming and birth defects. Likewise, mothers have been swimming when pregnant for years and there has never been an apparent problem. While there may be some slight increased possibility of problems for pregnant mothers who swim, this has resulted in most pools reducing the amount of chlorine they contain – so it didn’t seem to be a problem previously and now there is less of a risk than ever before.

Benefits of Swimming When Pregnant

There are however many benefits to swimming pregnant and this is true despite the recent concerns. For instance, if you swim when pregnant then this will first and foremost mean that you get exercise and this is very important when you are pregnant. Being pregnant of course means sudden weight gain and this places a strain on your heart, at the same time it makes moving around more difficult and causes an increase in appetite – which are both behaviors that can cause you to abandon your usual health routines. The solution is to do some regular exercise which will strengthen the heart and help to ensure you stay fit and healthy. At the same time this will cause more blood to circulate around your body and that will mean that you are able to get more nutrients to the unborn child and help them to grow.

Running however or jogging are not necessarily good ideas because they will cause high impact on the joints – as you are heavier than usual this will cause jarring, shin splints and other problems. Furthermore running can cause your stomach to shake around and potentially be jarring for the baby too. Swimming on the other hand has no impact as long as you don’t hyper extend your joints so the extra weight won’t make it damaging. Furthermore the water provides resistance much like lifting weights, except it allows you to exercise in this way very gently by just moving your limbs around. It can also be somewhat therapeutic to feel the weight taken off of you when you get in the pool. This is the perfect way to tone muscle, increase your cardiovascular fitness, get your blood pumping and lose weight without harming yourself or the baby. Any concerns about chlorine then should be taken with a pinch of salt.

Starting to Swim When Pregnant

If you are concerned about the chlorine though then there are other options when it comes to swimming when pregnant. For instance you can opt to swim outside or in the sea where there will be no chlorine, or you can opt to go further and to actually have a spa pool or paddling pool in your own garden.

You can also opt to choose between prenatal classes or to swim in public. By choosing classes however you know you will be participating in exercises that are suited to your current state and that you will get your own sectioned off area of the pool which will reduce the chances of people swimming into you or dive bombing right by your face. Most prenatal classes will occur early in the morning and/or during work hours which means the pool will be mostly empty – and this has the benefit of meaning less noise and fewer people coughing and urinating in the pool as well which creates a generally healthier environment. If you are going on your own then you could still benefit from choosing the less sociable hours to have your swim.