Yerba mate is a form of holly that is native to South America and which can have many health benefits when consumed as a beverage. The infusion is known simply as ‘mate’ and is prepared as a result of steeping the dried leaves of the plant in hot water (not boiling). This is a common social practice in Argentina and Brazil where mate is often shared out of a hollow gourd and enjoyed through a metal straw. It can also be purchased in teabags from specialist shops and can be enjoyed iced with milk or juice as well. It has a taste and texture similar to that of green tea and this can be an enjoyable, cultured and sociable way to improve your health.

That said at the same time there are some potential risks associated with the consumption of mate and it is important to recognize what these are and to take them into account when deciding whether mate is for you. 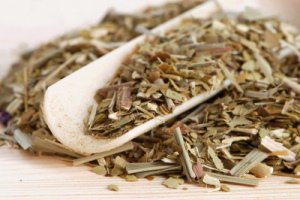 Like many other warm drinks yerba mate is high in caffeine which means that it is a stimulant. In fact the content is actually slightly higher than it is in tea, though lower than that found in guarana or coffee. While the caffeine content is not necessarily a good thing when enjoyed in excess, small quantities can be used to improve attention, wakefulness, alertness, recall and mood. Caffeine can also help to increase your metabolism which in turn can result in your body working faster to burn fat etc which makes it perfect for weight loss.

Caffeine belongs to a group of chemicals called ‘xanthines’ and there are two other xanthines in mate which make it different from other caffeinated drinks. These include ‘theobromine’ and ‘theophylline’ (the latter in very minor quantities). This composition of xanthines means that the caffeine reacts somewhat differently in the body to how it does in say coffee or tea. Here it will work to relax the smooth muscle tissue, while stimulating the heart. This means then that it could be used in order to relax the muscles before a massage or following sports activity.

It is also important though to recognize the negative effects of caffeine. For instance caffeine will place the immune system under stress as a result of the exertion of the central nervous system and that will then mean that it can cause exhaustion over long periods of time. Of course likewise it is also not highly recommended for those with heart problems due to its stimulating effect on the cardiovascular system which can lead to an increased likelihood of heart attack or stroke.

Caffeine is furthermore not a good idea for those with sleeping difficulties as it will make it harder to relax and to cease activity in the brain. It also has an exacerbating effect in nervousness and can bring on panic attacks in those who are highly sensitive to it. It may additionally cause headaches and in some cases jitters. Caffeine is also chemically addictive and it is possible to develop withdrawal symptoms when you’ve been without caffeine for extended periods of time.

That said, for most people drinking the quantities of caffeine found in mate will not cause any significant health problems – particularly as there is more caffeine in a standard mug of coffee.

Mate has been shown to contain antioxidants which means that it can help to eliminate free radicals in the body. This is important as free radicals are responsible for cell damage that leads to the visible signs of aging and that can eventually lead to cancer.

Mate is good for the heart as a direct result of its ability to reduce high cholesterol. Furthermore it is also helps to strengthen the heart through the inclusion of theophyline (that xanthine we mentioned earlier) which causes the heart to beat more. While this can be a bad thing for those who have existing heart conditions, for others it can be used in order to strengthen the heart when used in the right quantities.

Caffeine is a diuretic and this means that mate can be used in this capacity. Note however that the diuretic properties can also be a bad thing and can result in mate being quite dehydrating which can be a negative consequence.

Yerba mate is an appetite suppressant and this means that along with the themogenic properties caused by the caffeine it can be used well in weight loss.

We know that caffeine improves our energy and this is improved through the content of caffeine which combats tiredness and increases alertness and the production of adrenaline. Meanwhile however there are other ways that yerba mate increase energy – through the inclusion of vitamin C for instance, and through its ‘vassodilation’. Vassodilation is a term used to describe the widening of the blood vessels. This then in turn results in more blood being able to get through them more quickly and that means that you can get more oxygen to where it is needed as well as more of your other nutrients. Between this and the increased heart rate you should notice a sudden boost in energy and in muscle endurance.

Finally it has been found that yerba mate can change the concentration of the E-NTPDase family. You don’t need to know too much about what this means – but it results in an increase in ATP (adenosine triphosphate) which is ‘energy currency of life’. It is also believed that research into this aspect could help to lead to treatments for heart disease.

There are some studies to suggest that the consumption of mate can help to reduce cancer. This would work through the antioxidant properties, as well as through the content of phenolic constituents and this is believed to help reduce some cancers. However the research on this matter is inconclusive and actually some other studies have shown that it may in fact increase your likelihood of oral or bladder cancer. Neither effect is particularly large however, so it is best for now to simply enjoy in moderation and not to get too excited about the anti-carcinogenic or carcinogenic potential.

Yerba mate both relaxes smooth muscle tissue and is high in potassium and both of these things means that it can be used as a home remedy for cramp.

One of the ways in which yerba mate was traditionally use was as an anti-inflammatory. Recent studies have supported this use and have discovered that yerba mate can inhibit lipoxygenase – an enzyme that is associated with inflammation.