Losing a limb is one of the most upsetting and traumatic things that someone can go through and has profound implications for the individual psychologically as well as on their appearance and their capability. This is particularly difficult in the case when the limb in question is one or both legs resulting in the individual losing the ability to run, jump and walk normally while at the same time hugely altering the person’s self image.

New prosthetics to replace limbs and in particular lower limbs however show great promise for helping patients to recover some semblance of their previous mobility as well as helping them to cope psychologically with the loss. Perhaps the most famous example of successful leg prosthetics is Oscar Pistorius, the ‘blade runner’ who lost both his legs below the knees and runs using the aid of the ‘Cheetah Flex-Foot carbon fiber transtibial artificial limbs’. In other cases too soldiers who have lost limbs have been able to return to service with the aid of prosthesis. Here we will look at the various types of prosthetics and what some of the prospects are for the future. 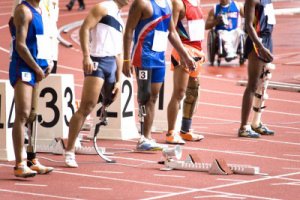 One of the most important aspects of prosthetics is the socket – the part of the prosthetic that attaches to the remains of the limb. During the 1990s Sabolich Prosthetics made great bounds in this area by developing sockets with a patient contact model that was specifically designed for the particular patient. Previously prosthetics would attach with just a square ‘bucket’ that was universal regardless of the individual, but now the socket was made to fit the individual’s bony prominences and muscle tissue and this helped it to attach like a glove and ‘lock’ into place while distributing the weight evenly across the existing limb. Sabolich then continued to add subsequent developments to the legs – bio elastic sockets, sense of feel technology, suction sockets and more that allowed AK patients to run and walk and move down stairs with one or both legs missing for the first time ever. At the same time this development drew attention to the need for the amputation surgeon to amputate in such a way that would prepare the patient for prosthetics.

Another innovation around this time was the use of ‘intelligent prosthesis’ which used microchips in order to control a prosthetic knee which was released by Chas. A. Blatchford & Sons, Ltd. This helped to make walking look and feel more natural with prosthetics. In 1998 the Adaptive Prosthesis took this further using hydraulic and pneumatic controls along with the microprocessor designed to provide the amputee with a gait that was adaptive to different walking speeds. However the Adaptive Prosthesis is incredibly expensive and it is not overly apparent that the benefit is worth it to patients.

In 1997 Otto Bock Orthopedic Industry created the C-Leg which was released in the States in 1999. This is an affordable and adaptable prosthesis that uses a microprocessor and a lithium ion battery in order to mimic the movements of the knee and create a dynamic gait for the amputee. The leg is capable of walking on a variety of gradients and calculates necessary angles and force in order to adapt to the situation. It is limited in that it cannot be used for running, and in that it can only be used for around 3 miles daily.

The ‘Flex-Foot’ Cheetah used by Oscar Pistorius was designed by Van Phillips – an inventor and himself an amputee who was upset at the limitations of current prosthetics at the time. He created the company ‘Flex-Foot Incorporated’ that developed limbs using carbon graphite ‘blades’ that would bend and store kinetic energy like a spring. This allowed the user to place pressure on the floor through the spring and thereby run and jump. The Flex-Foot was sold to Ossur in 2,000 who continue to manufacture and develop the foot. The blades were used by Oscar Pistorius to compete as a runner in future Olympics (though he had difficulty when it was found that running with the blades actually used 25% less energy than running with ‘regular’ limbs).

Interestingly these recent breakthroughs have begun to demonstrate the possibility of prosthetics as forms of enhancement that could potentially help healthy patients to improve their physical performance through the replacement of limbs in a manner similar to the ‘Bionic Man’. Oscar Pistorius seems to demonstrate that this would be theoretically possible, while another individual ‘Kevin Warwick’ who implanted an ‘electrode array’ into his median nerve which could sense the signals produced enough that he could use it to control a robotic arm that mimicked his own movements and even provided touch feedback via the implant. This research of course also has positive implications for the future of medical prosthetics which could interpret brain signals in order to control the limbs rather than rely on mechanical movements and external controls.

While there is currently no technology available that can completely replace a missing limb then, research continues into the area and many positive breakthroughs are suggesting that one day in the next century full mobility may be restored to amputees – and this might even surpass what they were capable of before.