In the year 2000, The United States Olympic swim team announced that about a fourth of their team had some form of asthma. Of course the fact that all of the members spent most of their time in swimming pools led researchers to start looking into a possible connection between chlorine and asthma. It has long been know that the chloramines and trihalomethanes in chlorine can exacerbate the symptoms of asthma, and even worsen the condition. However, as researchers began taking a closer look, it was found that the chemicals may actually be capable of causing asthma.

Several different types of studies were conducted to try and determine a link between chlorine and asthma. The initial studies found that when chlorine was mixed with skin particles, sweat, hair, bacteria, and urine (all organic substances), trihalomethanes (THMS) were formed. This meant that just being around chlorine could cause some effects. 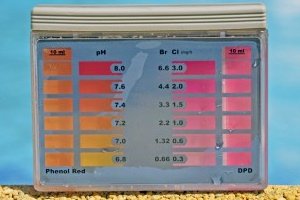 Many basic studies were conducted that simply took people who were constantly exposed to chlorine and removed them from it. In one such study, participants with occupational asthma were observed. Researchers found that once they were removed from all exposure, their symptoms improved substantially. A good number of the study group members were even able to quit using their steroid inhalers.

Another similar study took workers who were exposed to chlorine as part of their job, and asked them to change jobs, and stay away from the chemical. The participants were all workers at indoor swimming pools, and were not allowed to come near the pool at any time during the study. The results were astounding; every single person experienced a huge improvement in their asthma symptoms, and many were able to do away with medication.

It was found that the swimmers were not just suffering because of the chlorine itself, but because of the chemical reaction that happens when chlorine mixes with one of the organic substances mentioned. When the reaction takes place, harmful byproducts are released that have a significant negative effect on asthmatic symptoms. Not only were these found to actually cause asthma, but they have an extremely negative effect on the nose, throat, eyes, and ears as well.

In this study, it was concluded that the main cause of asthma or exacerbated asthmatic symptoms was the nitrogen trichloride found in the chemical. This only applies to the occupational asthma of swimming pool employees, as they were the only ones studied. The positive outcome was that in most cases, the effects were reversible once the individual was removed from all chlorine exposure.

Taking a Look at Children

A group of 226 children, all about age 10, were studied and followed to see how much time they spent around swimming pools. Researchers then determined how the chlorine was effecting their lung tissue with the more time that they spent around the pools. The children were not actually swimming in the pools, just being exposed to the air around it; each for an average of about 15 minutes daily.

As in the previous study, it was found that the more time they spent around the pool, the worse their symptoms became. This only proved further that there is a major link between the chlorine, its byproducts, and asthma. Even more amazing, some participants showed lung damage as extensive as that in people who heavily smoke cigarettes.

So now children are as unsafe at a swimming pool as they would be if we allowed them to smoke? The study would suggest so. The chlorine used in swimming pools was found to be a completely new and unsuspected possible cause of the increased number of children with asthma and other allergy-related diseases.

If you are thinking that you will never go swimming again, and thereby be completely protected from exposure, you are sadly mistaken. The study with the children found that the chlorine-based cleaners used in pools are the contributor to the asthma and worsened symptoms; these disinfectants are the same ones that we are exposed to every time we shower, do our laundry, wash the dishes, or run any tap water for any other reason.

Of course, with this finding, there has been a closer look taken at the water supplies all over the US. It was found that almost every supply has volatile organic compounds, and even inhaling these substances can pose health risks.

It was originally assumed that since ingestion of the substances in tap water was not harmful, that exposure must be safe. Now the real problem has finally been found; inhaling the substances is causing the problem. Every time you run a faucet in your house (if you are on a water system that is chlorinated), you are releasing chloroform gas; a major contributing factor in asthma. So essentially, every time you flush your toilet or brush your teeth, you and your family are exposed to asthma inducing substances.

What Can You Do?

Asthma is a very real problem that is increasing with each passing year; especially in children. Ongoing studies are finding more and more proof that asthma or the worsening symptoms of asthma are caused mainly by toxins within your own home. Knowing this, it may seem like nowhere is safe and you are just going to have to accept it. On the contrary; this knowledge is a huge first step in the battle against asthma. For as far back as the medical treatment of asthma goes, the routine has been that a child develops asthma and they are resigned to a lifetime commitment to an inhaler. The actual prevention of asthma has never before been discussed, but now it is a very real possibility.

Since we know that there are harmful toxins within your home, start there. Install a filter to clear as many harmful substances as possible out of your tap water and keep the amount of released gas to a minimum. Not only does this make your water safer, it improves the overall air quality of your home.

Research is still ongoing, and the number of children diagnosed with asthma has quadrupled in the last two decades; while we may not know a sure course for asthma prevention, any small measure you can take will help you to feel that much more protected.