It’s a well known fact that children must learn to do chores for many reasons. For one, it teaches them responsibility and appreciation at the same time. They learn that if they don’t take care of their things that they will be taken away, and the fact that they have to work for their things makes them appreciate them much more.

Aside from the challenge of getting your children to actually do their chores without a fight, there is also the issue of allowance. How do you reward your kids with an allowance without making it seem as if you are bribing them? What do you then allow them to do with that allowance? What is a good amount for allowance? There are so many questions that arise when it comes to making chores and allowance work, but it really does not have to be complicated.

Here are a few suggestions to help you along, but much of how you decide to make it work will be totally based on your own personal preference, your children, and your lifestyle. 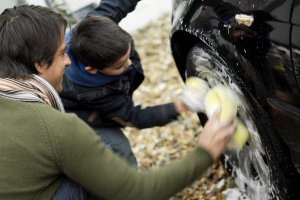 The most important part of making chores and allowance work is setting rules and making sure that everyone understands them. Many times, a large chart or board with everyone’s names and responsibilities on it is a clear way of ensuring that everyone knows what is expected. Children need to know what to do, when to do it, and how it should be done (when it comes to chores; not everything should be taught this way) so that there is no confusion or frustration.

Also consider having a method to the amount of allowance you are paying, rather than just a flat amount per week. Assign each job a dollar amount; that way your child only gets paid for each specific thing that he completed. At the end of the week, be sure to point out how much he would have gotten if he had completed all of his chores. This way, they know what they are earning each time they complete something, and it is more of an incentive not to skip any.

Once the rules have been set and the allowances outlined, the children know what is expected. If you are constantly using threats of, “no allowance,” it seems that the allowance is more of a bribe than a reward. The point of the allowance is to teach children to take care of the chores they’ve been assigned without being asked; you want to get to a point where they just do them because they know they should. Try and sit down with your child each week before paying them and discuss the week that has passed. Ask them how they feel, what they’ve learned, if they have any problems. If their chores aren’t getting done, there may actually be a good reason why, and you can’t help if you aren’t aware.

Consider a Designated Day or Time

Children of any age operate best when there is a set routine in place. If their assigned chores are daily things that must be done (making the bed, taking care of their dishes, etc.), set a designated time each day for them to be done. Once a chore becomes part of their everyday routine, it’s simply something that they automatically do rather than something they fight you on.

The same thing goes for chores that are done every few days or even once a week. Chores like mowing the lawn or taking out the trash should have a designated day and time that they are done. If taking out the trash is done between dinner and homework every Tuesday and Thursday, it’s something they know to expect rather than something they are constantly hounded to do.

The worst thing that you can do when trying to teach your child about chores and allowance is to give them the allowance even if the chores have not been done. As already mentioned, the rule has to be simple and clear: do the work, get the allowance; don’t do the work, don’t get the allowance. The second you break that rule for them even once, you’ve shown them that there is little or no value in earning, since it will just be given to them anyways.

It’s also important that if there is something that they really want and you tell them they have to save their allowance for it, that you make sure you let them. Too often parents will tell their children to save their money for a certain thing, and then they go ahead and pay for it anyways. If you really want your child to understand value, you have to let them earn things themselves.

Obviously you do not need your child to pay for his or her own things; the point is to teach them. Many parents will let their child buy the item with their own money, but they then add that amount to a special account (or even piggy bank) that they keep for their child. Someday you will be able to tell them about the money you’ve saved for them and it will mean even more.

If you pay close attention to your children from the time they very first start doing chores and earning an allowance, you will notice major changes in them over time. Hopefully, you will first notice that chores become as automatic as waking up in the morning; there is no longer a battle, the chores just get done.

As time goes on, you will notice your children truly start to appreciate money and understand its value. While you don’t want to necessarily force your children into your way of thinking when it comes to shopping, if you explain to them why you do the things that you do, they may agree and begin doing the same things (i.e. coupon clipping, clearance shopping). Your children may even want to start saving their money, either so they can always make sure they have a little something, or to be able to get something really big that they have been wanting.

If you start teaching your children about how work and earning go hand in hand as early as possible, they will quickly learn that their belongings have value and will learn to take better care of them. They will also understand the value of the work that you do as parents and all that it provides for them.