Love them or hate them, we all have freckles and we are all familiar with the little brown spots that collect around our cheeks and other areas. In fact, freckles are so common and so ‘mundane’ that many of us will never have stopped to ask why we might have these spots or where they come from. Here we will look at what freckles actually are and how they are caused.

Pigments in our skin, eyes and hair are what give our bodies their natural colors. Part of the role of pigments is to help protect the skin from damage and to this end our skin will produce pigment in response to sun damage. Specifically pigment is created by particular skin cells in the body known as ‘melanocytes’ which produce the pigment known as melanin. You will know this as the same pigment that causes us to tan. When the melanocytes produce melanin, they then feed it to the keratinocytes – which are the ‘normal’ skin cells that make up the protective outer layer of skin. 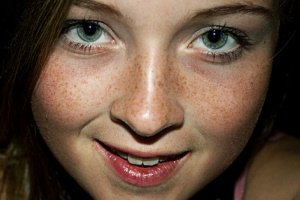 This is how we tan, but in the case of freckles the melanin is concentrated onto a single area. Rather than an even covering, freckles show where there is a build up of melanin in the skin. Freckles tend to collect around the face, but can also be found typically on the arms or upper shoulders and back.

The question is then of course – why do some people have more freckles than others? One answer is genetics, and someone who experiences lots of freckles is more likely to have a dominant melanocortin-1 receptor gene which causes your melatonin to cluster more as freckles rather than be evenly distributed across your body. At the same time, someone with paler skin is also more likely to experience freckles as their skin is more susceptible and sensitive to sunlight – and because fair skin will of course show up the contrast of the freckles more.

Freckles are not a skin condition and they are not a problem. However, they do correlate with being more prone to skin damage and skin cancer, and so it is even more important for those with freckles to wear sun block in order to block UV rays.

For those who do not like the appearance of their freckles, wearing sun block will also help them to avoid them developing, as will generally steering clearer of the sun, staying in the shade and wearing hats and long sleeved clothing for protection.

If you have freckles already that you want to cover up, then there are a few methods you can use such as foundation mixed to a shade between your skin tone and your freckles (for women of course). For men and women alike, using a self tanning moisturizer will help to bring out the melatonin in a more even way that doesn’t look like freckles. Alternatively using a dark fake tan can also mask the appearance of freckles. Some people meanwhile report success in using lemon in order to ‘bleach’ the skin and create a lighter skin tone.