Mesotherapy is a form of cosmetic surgery that aims to reduce subcutaneous fat cells as well as cellulite and thus competes with other methods such as liposuction, lifts and tucks. Of course the idea of being able to reduce fat in ‘spots’ and identify specific areas for reduction is one that is highly appealing to those unhappy with their current body shape, and the method is seemingly less invasive than a tummy tuck or liposuction.

Here we will look at how this method claims to work, whether it is safe and devoid of side effects, and crucially whether it works.

How Does Mesotherapy Work? 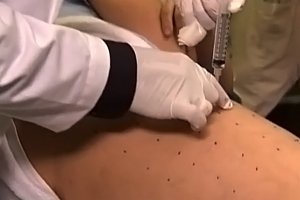 The central idea behind the process is that the practitioner uses a topical injection into the fat cells located just below the skin at specific locations around the body. This injection contains a ‘cocktail’ of herbs, minerals, vitamins and medications that it is claimed can break down fat cells to the point where the kidneys and bowels can flush them out of the system. Meanwhile the cocktail claims to be able to weaken the connective bands of tissue that pin the fat down in cellulite, so preventing this problem too.

The precise ingredients of this cocktail meanwhile will be altered depending on the desired use. That is, depending on the area where the fat is being disposed from, and the amount. Usually an individual will require around 5-10 visits to the clinic before they see any impact from mesotherapy with each visit costing around $150.

The method is not as effective as quickly as more invasive procedures such as liposuction and as such they are often marketed as a tool for ‘toning up’ and for helping to get rid of stubborn areas of fat – rather as a weight loss strategy in itself. Effects then will be minor, and they will also be prone to coming back if you do not change your diet and lifestyle – this is not a permanent fix.

Side effects of mesotherapy are fewer than those associated with liposuction and the procedure is generally regarded as less invasive – hence its popularity. However there are still likely to be some side effects and these can include bruising, redness, itching, burning, lethargy and nausea. Kidney conditions are also a possible side effect, and if you have any allergies to the ingredients used in the injection then you may suffer more pronounced effects.

However at the same time, the process is highly controversial and is the subject of a lot of debate within the medical profession. There is a lack of published studies supporting mesotherapy and this has resulted many to suggest that mesotherapy simply takes advantage of the desperation of many of its clients. In this vein, the American Society for Dermatologic Surgery made a statement announcing that it could not endorse the process until there was more evidence to support it.

Most concerning of all is the fact that there is no regulation whatsoever for the technique. Because the process is marketed as a cosmetic procedure it does not need approval from the FDA in order to continue. While all of the specific medications and minerals are FDA approved that go into the cocktail, they are being used ‘off label’. In other words they have not been approved in any way for use in the destruction of fat cells or cellulite and may be unsafe.

Because every doctor will use a different combination of ingredients this also means that the procedure can vary wildly from instance to instance. You can’t quite be sure what you are having injected into you and miscalculations might prove highly dangerous – especially if they interact with other medications you may be using etc.

Should You Use It?

The million dollar question then is should you use mesotherapy? And the answer is probably not. While the benefits and promises of mesotherapy might sound tempting, the reality is that this is an untested and unregulated procedure that varies wildly from clinic to clinic. When so many healthier and safer alternatives exist for weight loss, you are much better off using those measures first (particularly as mesotherapy only promises a subtle benefit anyway) – at least until the process has been studied in greater detail.