In today’s world of big cities, tall buildings and large populations it was possibly inevitable that a range of new ‘urban’ sports would emerge. First there was skating and rollerblading which today are huge industries with whole parks dedicated to them and huge televised spectator competitions. Then came ‘parkour’ and ‘free running’, which essentially did the same thing as skating but without the board – getting people to perform stunts by leaping between buildings and flipping over railings.

Skating and rollerblading are the big names but there are countless other similar activities like ‘buildering’, ‘BMXing’, ‘Free boarding’, ‘Streetboarding’ and much more. Powerbocking is no different, and in many ways is the natural progression of these sports. Here we will look at what powerbocking is, and how you can get started if it appeals. 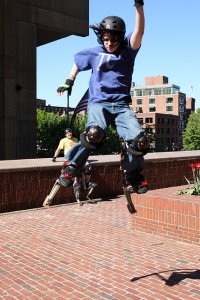 Powerbocking goes by many names. You might have heard it called ‘power-rizing’ or ‘blade running’ or countless other monikers. If you haven’t heard of any of these terms however, perhaps you may have seen powerbocking yourself but not known what it is.

Powerbocks are large ‘stilts’ with a spring mechanism attached – normally in the form of a piece of flexible carbon fiber stuck to the back. The individual wearing the powerbocks will be taller as a result of the leg attachments, but will also have much more ‘spring’ in their step as a result. This then allows them to run at high speeds (some sites claim up to 30mph), to jump incredibly high and to perform tricks and stunts such as bounding down flights of stairs or flipping over stationary vehicles. If you’re still not getting the picture then think of the ‘blade runner’ Oscar Pistorius who overcomes his double amputation by using carbon fiber blades – powerbocking achieves the same things but attaches to the leg rather than taking its place.

Powerbocking then is wearing these attachments and performing the range of moves. This involves stunts and tricks, though the purpose and objective of powerbocking will vary between individuals. For some it is most likened to an extreme sport, whereas others see it as a mode of transport, form of exercise or even form of artistic expression.

Powerbocking was originally invented by Alexander Bock who patented the technology in Germany on April 13, 2004 under the branding ‘powerskip’. The devices were referred to as ‘jumping stilts’ and ‘power stilts’.

Powerbocking though fun and certainly impressive is also quite dangerous and of course the practitioner is poised high up while moving fast and often performing jumps and acrobatics. Safety precautions are an absolute must when powerbocking which means wearing the full range of safety gear (knee pads, elbow pads, crash helmets) and starting slowly with someone around for help. Due to their nature, powerbocks are very difficult to put on and the best way to do so is to sit on the floor and then pull yourself up using nearby scenery or a companion. You should also be careful to avoid grass which can be slippery and which can cause the bocks to get stuck.

It is important to make sure that you purchase the correct powerbocks when starting out, and this means buying from a good source (avoid sellers you are unsure of on eBay) and making sure that you enter your weight correctly (this will affect the power of the spring). Be sure as well to fully read the instructions and to follow them closely each time. Some powerbocks require regular maintenance and processes such as tightening bolts, and might require adjustments to fit your leg size. Over time you might find that prolonged use of the powerbocks can place a strain on your knee so start out slowly and build up to more intensive use. If it does hurt your knee then stop.