A dog is man’s best friend, a great companion and a tone of fun – but they can also serve some great helpful purposes and make life easier for you as a result. Sheep dogs demonstrate this well and make life much easier for farmers, while guide dogs give blind individuals the ability to head outside with confidence. 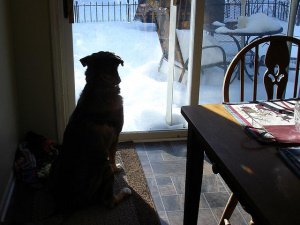 So what can your dog do for you? Well potentially you could train your dog to be a guard dog and help you to protect your property from burglars and other trespassers, or if you run a company or have a facility/office block then they could even be a guard dog as their ‘full time’ professional dog in the same way as you might employ a human guard.

The question is, how do you go about teaching your dog to be a guard dog, and how can you make sure that its territorial and protective while at the same time remaining obedient and safe. While training guard dogs to a ‘professional’ level is something that you are likely to need help with, using some basic tips and tricks it’s possible for most people to give their pets some guard dog instincts that may at least deter thieves who are put off by the sound of a deep growl and barking.

First of all, it’s important to make sure that you start training your dog when they are young. The old adage that you ‘can’t teach a dog new tricks’ is not actually strictly true, but when it comes to guard dogs it is certainly a good idea to start young. This is because obedience is absolutely crucial for a guard dog, and you need them to be able to obey your commands instantly and without hesitation – it could be the difference between a scared postman and a lawsuit. At the same time you also need to choose your breed well, and the dog needs to be territorial, easy to train and large enough to pose a feasible threat (Chihuahua may be well intentioned but they are unlikely to make much of an impression). Good dogs to choose are Chow Chows, Doberman Pinschers, Rhodesian Ridgebacks, Rottweilers, German Shepherds and Bull Mastiffs, though a range of mongrels and retrievers can also do a good job.

To begin, what is it that you are trying to teach your dog to achieve? Essentially you want your dog to aim to bark at and chase away any strange vehicle or person that enters your drive, and you need them to be able to learn commands to stop and to cease. Here we will look at how.

Most dogs will bark naturally at passers-by and people who come up your drive as a territorial act and an instinct. If you happen to have a dog that’s a pacifist then you may have a little more trouble. Now while most people will try to stop this behavior, you need to teach your dog when it’s acceptable to bark. Let your dog sit out on the front drive a while and sit outside there with them. If they bark and there’s no noise and nothing to be alarmed about, then you can tell them ‘No’ and smack them. Alternatively though, if they bark and it’s because you can hear something or see something near your home that could potentially be a threat, then congratulate them with a snack and with attention. You can also arrange of people you know to come up your drive and then treat your dog when it barks to alert you. Over time your dog will get better at recognizing when to bark, and will do so almost instantly to alert you of problems.

There is though a fine line between a good guard dog and a dog that is just overly aggressive and it’s important for your dog to recognize this difference. For this reason then you need to train your dog to respond to the words ‘Come’ and ‘No Bark’. This way you can get them to stop threatening behavior and to come to you as you require.

To do this you will train them in the same way that you would have probably trained them to sit. Here you are using ‘classical conditioning’ and using treats as a reward in order to make them associate the desired behavior with reward. At first you will need to wait for them to do the action. So for instance if they come to you then you reward them by saying loudly ‘come!’ which will begin to establish the connection between the word, action and reward.

Next you should start to encourage the behavior so that you train them to come when you say it. Crouch down so they know to come to you and shout ‘come’ while holding the treat. When they come to you you then reward them heavily and they again will learn to react to the phrase on its own. Eventually you will no longer need the snack. You can teach your dog the other behaviors in a similar way.

If your dog should show a lack of discipline by either barking when you have told them to stop, refusing to come or being aggressive toward the intruder then you should make sure to punish them in kind by smacking them on the side and saying firmly ‘no’. It is highly important that your dog doesn’t act aggressively and this is something you can’t accept.

One way to help avoid aggressive behavior is to make sure your dog is socialized. This means spending a lot of time with them, and introducing them to a variety of different people. This way they can learn to get on with people and not to act aggressively and you will be able to improve their general nature.

Once your dog is trained there are several things you can do to help them do their job. For instance an iron gate is a great idea as it allows your dog to see what’s going on outside and to ‘stand guard’ more effectively as a result. Likewise you can also invest in an intruder light that uses a sensor that goes off when someone steps into its beam. This has many beneficial effects – alerting the dog and yourself, while at the same putting the intruder on the spot and highlighting the security you have in place.

Lastly consider a ‘beware of the dog’ sign. Not only is this a good way to play fair and to again avoid a law suit, but it can also act as a great deterrent on its own and prevent anyone from considering breaking in. Even if you don’t have a dog or your dog is a Chihuahua, this sign can sometimes be enough on its own to deter trespassers who are looking for that golden opportunity.