L-Taurine is an amino acid, meaning that it is one of the acids found in protein – one of the ‘building blocks’ of life that combines to form all of the materials that make up the human body from bone to blood. Of course L-Taurine is not responsible for all of this, and each amino acid serves a different role in the body.

L-Taurine is a sulfur-containing amino acid (along with methionine and cysteine) which the body stores and concentrates in the muscles and central nervous system. The body produces its own L-Taurine and thus it is not considered one of the ‘essential’ amino acids you need in your diet. However you can obtain it from your diet if you so wish, particularly from animal proteins like meat, milk, fish and eggs. 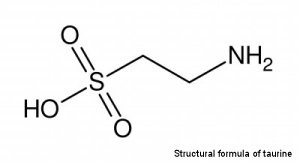 L-Taurine is popular among many health enthusiasts due to being a potent antioxidant. This means that it can combat ‘free radicals’ lose in the body which are responsible for the cell damage that causes visible aging and in some cases cancer. It has also been shown to help prevent heart disease and other problems, and is also able to prevent the aggregation of platelets. In other words this means it can prevent platelets from sticking together which can cause a blood clot and stroke.

In one study it was found that animals were twice as sensitive to aggregation of platelets when they weren’t receiving additional L-Taurine in their diets, and supplementing humans with the substance has also been shown to reduce that aggregation by between 30-70 percent. This could also in theory help general circulation and that in turn would mean more oxygen and more nutrients being circulated around the body aiding with muscle and organ repair and helping to improve energy and cardiovascular fitness. For this reason it is used by many bodybuilders and athletes to try and improve energy. At the same time it is also useful for bodybuilders because it can help to improve the synthesis of protein by expanding the muscle cells and increasing hydration. This means more muscle fullness and means that more of the protein bodybuilders consume is converted into muscle.

The increased blood flow also helps to improve brain function and it plays a role in neurotransmission too. It is often used therefore as well for mood bolstering effects.

It’s also thought that L-Taurine may be helpful for those with cystic fibrosis. This is a genetic condition that affects the respiratory system, sweat glands and pancreas. People with cystic fibrosis are less able to absorb fat due to their pancreas issues, and this results in a fatty diarrhea called steatorrhea. Supplements have been found in studies to help improve steatorrhea by around 20% and to help improve fat absorption.

Interactions, Side Effects and Warnings

L-Taurine is generally considered to be safe and healthy when used by adults in the correct dosage. However there is some concern that when used for its mood enhancing effects to treat bipolar disorder, it may in fact worsen the condition rather than improving it. L-Taurine may also act like diuretic and so is not recommended for those suffering diarrhea or dehydration, and could also interact with lithium.

Supplementation of L-Taurine is possible but can be fairly costly. It is recommended for bodybuilders (along with other amino acids), for vegetarians who have low levels of L-Taurine, and for those suffering with low mood or cystic fibrosis.