Cinnamon is an incredibly popular spice that many put in their tea or on their toast on a regular basis. What most don’t realize, however, is that cinnamon in its oil form, has incredible health benefits. The benefits of cinnamon oil far outweigh those of any other form, but because it can cause irritations, most people don’t use the oil.

Originally found in the tropical parts of Asia, specifically Sri Lanka and India, cinnamon is a lovely little shrub whose uses were quickly put to work in Ayurveda. Cinnamon is now used all over the world as a means of treating health problems and a wide array of serious disorders. Here we will look at some of the major health benefits of cinnamon oil as well as the disorders it has been known to treat.

While cinnamon oil has been found to be useful for a number of health issues, there are a few that are very basic and probably well known. The first use for cinnamon oil is as a mouth purifier and breath freshener. The oil has been used quite commonly for some time in chewing gums and toothpastes because it is an excellent way to quickly get rid of bad breath. 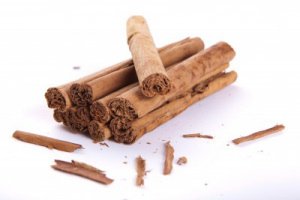 The sweet scent of cinnamon is very uplifting and is often used in perfumes and other fragrant body products. Diffusing the oil is also said to have an uplifting effect on the mood. Likewise, diffusing cinnamon oil and breathing in the aroma is a great way to aid in the recovery of colds, flus, and congestion. The strong aroma released from the oil helps to clear the sinuses, aids in breathing easily, and has an uplifting effect on the sufferer.

In cooking, cinnamon is said to be an excellent digestive aid. Several ethnic dishes incorporate cinnamon as a way to help avoid indigestion, upset stomach, and other stomach ailments. Since it also aids in removing acidity, it’s also a great aid for diarrhea and even morning sickness.

Quite strangely, cinnamon is also often used as a mosquito repellent. Studies have shown that cinnamon oil is an instant way to kill mosquito larvae, which has cinnamon on its way to possibly becoming the key to solving the global mosquito issue. Cinnamon oil also has antibacterial and antifungal properties that make it an excellent way to fight infections.

For women, cinnamon oil has a vast array of benefits just for you. During menstruation, cinnamon is an excellent choice for naturally relieving cramps and other discomfort. Cinnamon has also been found to completely delay the return of menstruation after childbirth which aids in avoiding early conception. Breastfeeding mothers will also find that cinnamon helps the secretion of breast milk.

Several studies have also shown that cinnamon oil actually boosts brain function. In short, this oil is actually a natural brain tonic that helps improve memory and remove tension and nervousness. One study revealed that those who regularly had cinnamon oil were better able to process cognitive activities such as memory, visual-motor response, and recognition.

Cinnamon oil has amazing benefits when it comes to your blood as well. It has been found that the oil actually aids in removing impurities in the blood and improves circulation. The blood thinning agent that is found in cinnamon oil also helps in reducing pain and increases the oxygen supply to cells. Some studies have even gone so far as to say that cinnamon oil will actually help prevent heart attack.

Cinnamon oil also helps to stop heavy bleeding that occurs from injury. This means that along with aiding your blood on the inside, it also helps to facilitate healing on the outside. Along with all of the other benefits that cinnamon oil offers your blood, it also maintains the ability to control your blood sugar levels. Many diabetics have found that by increasing their cinnamon intake, they were able to reduce the amount of insulin that they needed.

Cinnamon oil, along with its many other properties, has been found to have anti-inflammatory properties as well. The oil greatly aids in relieving sore and tired muscles as well as helping to loosen up stiffness. Cinnamon can also help to relieve joint pain and it is often recommended that arthritis patients increase their cinnamon intake as well as use the oil. For those suffering from migraines and other headaches (even when related to cold or other illness), cinnamon oil is great for relieving headache pain and pressure.

For those suffering from heart disease, coronary artery disease, or even high blood pressure, cinnamon oil may need to be added to your list of medications. Cinnamon oil, according to some studies, has a significant amount of calcium and fiber in it. These help to provide your body with added protection against these diseases and conditions, and taking them before you have problems can aid in preventing the onset altogether.

Because cinnamon oil is so strong, it is suggested that you avoid consuming it orally. Using it on your skin can have wonderful effects, but it should be tested on a small patch of skin first, to ensure that you will not have any adverse reactions to it. The best way to use cinnamon oil is by adding it to a carrier oil or blending it in with other essential oils that you use. Diffusing it also allows you to reap the full benefits, so long as you are not using a diffuser that heats the oil before dispersing it into the air.