Blindsight is an incredibly fascinating, but also very traumatic phenomenon that outlines the complexity of the human brain and in particular the intricate nature of the link between our conscious and unconscious mind.

In blindsight a person is perceptually ‘blind’ – in other words they can’t see anything or are unaware that they can. However what makes the condition unusual is that they can respond to certain stimuli. For instance were someone to throw them a ball, they may move to catch it, or to dodge/block it. In other words there is clearly some perception, but the individual is not aware of what they are able to unconsciously see. So what’s going on here? 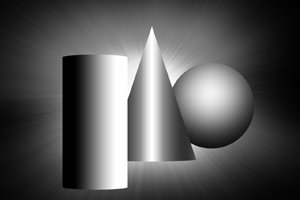 There are actually two different types of blindsight. In type one a subject has no awareness whatsoever of stimulus, but are able to predict specific aspects of a stimulus. For instance they might be able to tell you the color of an object, or reach out to its location. While they won’t be accurate 100% of the time, in a forced-response trial they score statistically much better than would be possible through chance alone.

In type 2 the patient has some awareness of the movement or of the fact that something is near them, but still can not visually ‘perceive’ it. Their eyes may even track movement of objects as they normally would, but they won’t be able to describe it.

This unusual phenomenon is the result of damage to the brain and specifically the ‘occipital lobe’. Damage to areas of the primary visual cortex or V1 (the occipital lobe is made up of several cortices) will result in the loss of perception in the respective areas of the visual field. Visual processing goes through several stages and utilizes various areas of the brain. It is believed that in blindsighted patients some of the visual information from the optic nerve bypasses the V1 and makes it to the extrastriate cortex. The V1 area is the largest area for visual processing, but the extrastriate cortex which makes up areas V2, 3, 4 and 5 is sufficient to provide us with the ability to respond to movement.

The surprise then isn’t that we retain the ability to respond to visual stimuli after damage to V1, but rather that we are completely unaware of the processing occurring in the extrastriate cortex. It seems that these areas are used for some unconscious processing which can help us to react instantly to movements and to adjust our gaze and pupils etc – most of us don’t actively think about where we look unless we are specifically searching for something (and even then the gaze tends to be an automatic process). It seems to be in the V1 that we process more details visual imagery and transmit it to our conscious area in the anterior side of the brain for us to ‘muse’ on.

There are many interesting implications of blindsight. It demonstrates for instance how much goes on in our brains that isn’t directly ‘controlled’ by conscious thought, and it proposes potential explanations for several ‘supernatural’ phenomenon. It also highlights interesting questions about the nature of our consciousness, for instance, why is it that under forced conditions blindsighted patients are able to name colors and shapes?