Choosing a protein shake can be a highly difficult process when there are so many different brands out there. They’re all so expensive, so you want to make sure that they work, but at the same time you need to consider things like mixability, taste, calories and more. What satisfies best on all these counts? Is it EAS? Maximuscle? Muscle Milk? Or something else entirely? 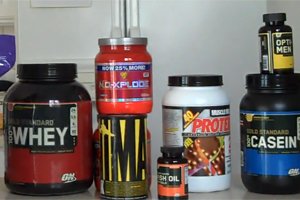 Protein shake is made from various pure forms of protein, and this is then prepared in a powder form to be mixed with either milk or water for convenience. While this is true of all protein shakes, the difference lies in the source that the protein originally comes from and that in turn affects various aspects of how it interacts with the body. The main sources of protein are as follows:

Whey protein is a by-product of the cheese making process. In other words, when they make cheese from milk, the whey protein is what is left over. This is a highly pure form of protein that includes a high quantity of amino acids in a highly bio-available form – and in fact the most bio-available form and complete form of any protein shake. It’s high in IAAs (indispensable amino acids) and BCAAs (branched chain amino acids) and that means that the protein is already in a format that is similar to muscle and can be quickly and easily converted to form the latter. It is also easily and quickly absorbed by the body, as well as being relatively affordable. However whey protein will often come with a fairly high carbohydrate/calorie count, which makes it more suitable for bulking rather than cutting.

When using whey protein you are best advised to do so immediately after a workout which would give you an immediate surge of protein to be used in the ‘anabolic window’ that occurs when our body is triggered to begin repairing and rebuilding itself after a workout. Because whey is so fast to be absorbed (and faster than any other protein shake), it is ideal for this time.

Egg protein is another great choice for your protein shake and has a high biological value as well a very good amino acid profile making it again quick for the body to convert into muscle. Where it is better than whey protein is in its low carb count. This is because the protein comes from just the egg whites which are low in calories and virtually fat free – so it’s ideal if you want to cut and get ripped.

Here’s the downside though – egg protein is not only very expensive but also has a lower biological value than whey or plain egg whites. In other words you would get a better effect from simply gulping down egg whites than you would from spending money on this shake – while if you are bulking you might as well use whey protein. It also absorbs slightly more slowly than whey.

Casein is another form of protein shake that, like whey, comes from milk. This is a by-product too, however here casein account for 80% of the protein found in milk, while whey only accounts for 20%. Casein has a lower biological value and a worse amino acid profile meaning less of that weight will be converted to muscle. It is also highly slow to act and will cause the very gradual release of protein into the blood stream after consumption. This is actually the main strength for casein, as it means it can be consumed just before going to bed and that it will then gradually release protein throughout the night while the body repairs and rebuilds itself (just as we are in an ‘anabolic state’ after a workout, so too does sleep serve similar function).

Soy protein comes from soy bean, and because this is a plant source that means it has a much worse amino acid profile and biological value. Though it contains all the amino acids they are not in a form that is as easy for the body to use. When choosing between protein shakes then, soy protein should be considered as the last option. The benefit of this form of protein of course lies in the fact that it is safe for vegetarians and the lactose intolerant who can’t afford egg protein.

In short then, if you can only afford one protein shake you should make it whey protein. This is a relatively affordable shake that also has the highest biological value and the best amino acid profile. However there is also merit to using a combination of several protein shakes. For instance if you were to combine casein and whey, then you could use whey after workouts and casein just before bed and make the most of each of their strengths. This way you would also get the greatest variety of BCAAs and amino acids.

Meanwhile you may wish to use an egg protein if you were looking at burning fat, or if you were lactose intolerant – but you may as well accomplish the same thing by simply purchasing eggs and eating just the whites (the yolk is high in fat and cholesterol). Lastly soy protein is an option for vegetarians, or for when nothing else is available.