Vitiligo is a condition which results in depigmentation of patches of the skin. This occurs when the melanocytes – responsible for the production of melanin in the skin – are unable to function. The cause for that malfunction is not fully known, but it is suggested by research that it could be the result of autoimmune damage, oxidative stress or viral infection. It is a rare condition affecting only 1% of the population worldwide. It generally appears in symmetrical patches and can cover large sections. 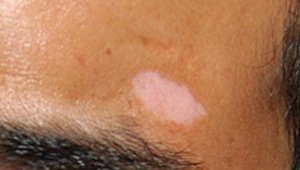 Here the skin is exposed to UVB light from UVB lamps and this can be achieved at home using a commercially available UVB lamp or at a clinic. This can help to encourage the melanocytes to once again start producing melanin and is effective within a few weeks as long as the individual has had the patches for less than three years. Otherwise it may still be effective but can take longer. Usually treatment will be used 2-3 times weekly in a clinic, or daily when done at home.

While the treatment can be effective quickly, it is not guaranteed to completely return pigmentation.

Here ultraviolet light is used alongside a drug designed to increase the skin’s sensitivity to ultraviolet light. This treatment is used twice a week for 6-12 months. However it can have side effects such as ‘sunburn’ and freckling. UVB phototherapy is used more commonly as PUVA is more damaging and as they are both similarly effective.

Cosmetics can be used to help manage the condition and to make it easier to live with. Makeup and ‘camouflage’ solutions can be used to either conceal the patches, or to darken the surrounding areas (or both). Thoughtful clothes choices may also be useful for hiding the patches, and it may be possible to come to terms with the appearance of the patches. There are several ‘famous’ cases of successful individuals who sport vitiligo patches.

The most common treatment is the use of corticosteroid creams.

One option is to completely depigment the skin around the area using topical medication such as monobenzone. This can then remove all of the pigment in the skin resulting in an at least ‘even’ appearance. However this is a permanent and vigorous procedure, and it leaves the individual highly susceptible to sunburn and melanomas.

Generally maintaining some lifestyle changes can also help encourage repigmentation. In one study carried out in 1997 it was found that getting lots of sun, along with supplementing the diet with vitamin B12 and folic acid, could help repigmentation in 52% of cases.

Studies are being carried out to develop new treatments for vitiligo – including one study in 1992 in which melanocytes were ‘transplanted’. This resulted in the effective repigmentation of whole areas, and around 70-80% of those who received the treatment enjoyed almost complete repigmentation. However the results of this process still were not permanent.