Age-related macular degeneration (AMD) is an eye disorder that affects approximately one in every 500 people between the ages of 55 and 64. It is more common in even older generations, where it affects one in eight people over the age of 85.

What is the macula?

The back of the eye, called the retina, is a layer of millions of tiny cells that detect light entering the eye through the pupil. Once this light hits the retina, the cells transfer information about shade and color to the brain, which then makes sense of the information and converts it to images. This complex mechanism is what allows us to see. The macula is a tiny part in the middle of the retina that is even more densely packed with these receptor cells, and it is this area that allows us to see fine details in the center of our field of vision.

Why does the macula degenerate?

There are a number of reasons why the cells in the macula of the eye might deteriorate and stop working properly. Smoking is a significant risk factor, as is prolonged overexposure to strong sunlight without wearing good quality sunglasses. Several genes have been identified that may confer increased risk of AMD, and women are also more likely to develop macular degeneration than men. As with many diseases however, the greatest risk factor for developing AMD is increasing age, since as the body gets older, it becomes gradually less able to repair itself.

What are the symptoms of AMD?

Most people who develop what is known as ‘dry’ AMD first start to lose the ability to see fine details, such as when reading a book or watching television. They might initially pass this off as age-related short sightedness, but notice that objects look ‘smudged’ or distorted in the very middle. They might feel sensitive to bright lights, or notice lights that are not really there. Peripheral vision, that is the things that you can see off to the sides while you are looking straight ahead, is not usually affected, but a small number of people experience a more severe form of AMD – called ‘wet’ AMD – whereby blood vessels begin to grow over the damaged cells. This type of AMD can lead to total blindness if the new blood vessels spread across the retina. 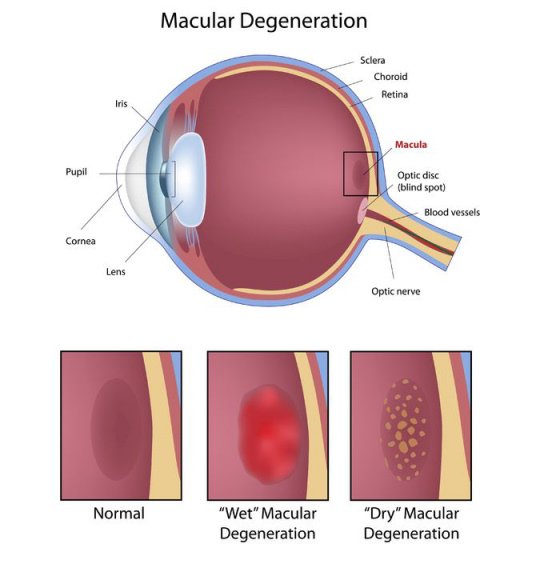 How can AMD be prevented?

Not smoking, or quitting smoking if you already smoke, is one way to reduce your risk of developing AMD. The constant bombarding of your cells by the chemicals in cigarette smoke means that the body has to work harder to repair the damage, and it can’t always keep up. It’s important to wear good quality sunglasses when exposed to bright sunlight, as the ultraviolet (UV) radiation from sunlight can also damage the cells of your eye. Some research has shown that eating a healthy, balanced diet that is rich in vitamins, particularly vitamins A, C, E and zinc, can help to slow down the progress of AMD in those people who are already starting to show symptoms. Since AMD can be treated to a certain extent, it is important to have regular eye examinations by a qualified optometrist – they will be able to identify any problems in your eye health early on and advise you on the best course of action to take.

What treatment is available for AMD?

Unfortunately, there is currently no cure for AMD; the disease is a progressive condition that will get worse over time and cause impairment to your eyesight. For the smaller number of people with ‘wet’ AMD that involves the growth of blood vessels over the retina, medication called anti-VEGF treatment, which helps to slow down the growth of new blood vessels, can sometimes be effective in delaying the disease’s progression, but it is never cured completely. This is certainly one condition for which it is true that prevention is better than cure.

What is the future for the treatment of AMD?

There are a number of research studies ongoing that are investigating the potential for stem cell therapy in the treatment of AMD. Stem cell therapy is an experimental treatment whereby new, healthy cells – in this case macular cells – are grown in a lab and transplanted to the body in the hope that they will replace the faulty ones. Another very recent announcement from the University of Strathclyde in Scotland, together with researchers from Stanford University in California, is that a sophisticated prosthetic (artificial) retina is being developed that would be transplanted to the back of the eye and function in a similar way to the normal cells, thus allowing a person to regain vision. These experiments are still in the very early stages, but it is hoped that over time, and with more research, AMD may become a curable condition.