Flirting is a hell of a lot of fun, and done correctly it can create a great feeling of excitement and sexual tension that can help to really build an attraction for someone. However at the same time it’s also by no means easy, and unless you’re naturally confident it can be rather nerve wracking. Will your signals be misconstrued? Are you being too presumptuous? And what if they aren’t attracted to you? In any case this has all the makings of a dilemma, but for lesbian women it can be even more so – particularly if you don’t know the sexual orientation of your target. For lesbians there’s not only the concern that the person might be already in a relationship, or that they might not be that into you, but also that they might not swing that way at all which can make for a potentially awkward and embarrassing situation. Meanwhile there is considerably less information available for lesbians when it comes to this kind of thing, and attitudes and techniques can vary widely.

That’s no reason to get disheartened though, all it does is increase the challenge and thus the satisfaction when it goes right. Be bold, and follow the tips below to make life a little easier. 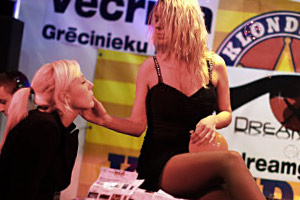 Really that is the main tip that you must take on board – don’t be shy or apologetic about flirting and try to assume they’re lesbian at first rather than the other way around, even if you’re not sure. Being flirted with is always a compliment, and there’s no reason why it should be awkward to learn that she isn’t interested – if she’s offended or upset by it then she clearly needs to lighten up and probably wasn’t a great catch anyway. Flirting is harmless and fun, do you get offended when guys hit on you? And it’s important that at least one of you be bold or you won’t get anywhere.

Obviously you should drop hints that you like the other person – that’s what flirting is. At the same time though, drop hints as to your own sexual orientation. This quickly makes the problem of finding out if they’re gay or not obsolete – as once they know you’re into women they’ll figure out what’s going on and they’ll either start flirting back… or move away slightly…

The rest is the same as flirting in any situation, and the key is to show the person attention, to tease them and occasionally touch them where possible. Flirting essentially means bantering and building a situation where they want to impress you and where they’re having a good time. You need to demonstrate you’re confident, and you need to drop subtle compliments but make them work for it. This is how you up the ante, and they will naturally want to impress you and spend more time with you if you can walk the line properly between be cock and detached while still showing that you have some genuine affection for them bubbling beneath it all. Don’t gush and dote – it just makes things too easy. You can find plenty more advice on this online and in books and most of what you read about straight flirting can be applied here with a little tweaking here and there.

Move the Conversation on to Sex and Dating

One way to generally ensure that things get exciting and a little hotter under the collar is just to move the conversation to talk about dating and relationships. This is a great time to drop in that you’re gay, but at the same time it gets them thinking about you in that way. At the same time you can also discuss your interests and preferences when it comes to dating which is a great way to find out if you’re compatible and it allows you to discuss a common interest – something that straight people can’t really utilize in the same way.

Another strategy that can apply to most flirting situations is to try and work up a bit of healthy competition. In other words, once you’ve created some sexual tension between you and the object of your desire, and once you’ve got them wanting more, you then start talking to other women in a similar way and flirting with her friends/other women there – or even just commenting on how good they look. This brings your motives into doubt (thus making things a little less intense) but at the same time it stimulates a natural competitive streak that we all have which will make her try all the harder to win your affections.

That’s another thing you can do to take advantage of the situation – offer to share clothes and makeup. It’s intimate if you’re sharing something like lipstick, and at the same time it gets them feeling ‘obligated’ and further wanting to please you. Likewise you can ask to share something of theirs – and if it’s makeup that’s a great way to get them on their own as you go to freshen up together too.

If the problem is finding women with whom to flirt – which can indeed be difficult for lesbians – then of course you need to think about your venue carefully and perhaps consider choosing a gay and lesbian bar to practice your flirting (don’t underestimate the importance of practice – just like any other skill).

This then puts you in a situation where you will be able to play the numbers – which quite simply gives you statistically more chance of finding someone you like and who likes you. A strategy that you can use to do this – which also does away with the threat of rejection, is to try situating yourself somewhere prominent at the bar and them simply shooting looks at people around the room and smiling at them. Smiling is a very underrated flirting technique, and it’s friendly and harmless while sending a clear message when used in this context. If they smile back, or if they come toward you, then you’re on to a winner. If they don’t then you’ve lost nothing and don’t have to deal with any embarrassment – all you’re guilty of is being friendly.