Let’s start by saying what hay fever isn’t – it isn’t caused by hay, and it doesn’t produce a fever. It’s a form of allergic rhinitis, a collection of symptoms that occur when you are exposed to substances you are allergic to (allergens), and they provoke in your body an allergic reaction. In particular, the term hay fever refers to allergic rhinitis caused by outdoor triggers, most commonly plant pollen. Literally millions of people suffer from seasonal hay fever; it affects 20% of the population at some point in their lives.

What are the symptoms of hay fever? 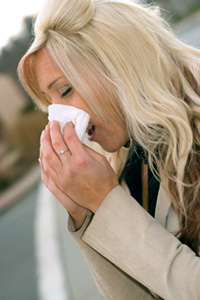 The most common symptoms of hay fever are similar to having a mild cold. They include sneezing, coughing, a runny nose and nasal congestion, itchy or watery eyes, increased sinus pressure, impaired abilities to smell and taste, and occasionally swollen, blue-tinted skin under the eyes. These symptoms differ from colds in that hay fever is not accompanied by a fever (colds often are), the symptoms appear immediately after exposure to the allergens (colds appear 1-3 days after exposure to the virus), and they last as long as the exposure continues (colds go away in 5-7 days).

Hay fever tends to be seasonal, an allergic reaction to tree pollen (commonly released during the Spring), grass pollen (released from the end of Spring to the start of Summer), and weed pollen (released from Spring through late Autumn). For most people, this pollen does no harm. But if your immune system is sensitive to it, when inhaled this pollen causes production of the antibody immunoglobulin E (IgE), which triggers the production of histamine. This causes the symptoms discussed earlier, and an increase in mucus production. The severity of the symptoms varies; some experience mild sneezing and congestion, while others may experience headaches, hives, or rashes. If the individual suffers from other allergic conditions, such as asthma, exposure to the pollen that causes hay fever may also trigger an asthma attack.

You can’t avoid all sources of pollen during “hay fever season,” but you can limit your exposure:

• Avoid the outdoors. Spend more time indoors, especially in the mornings and on warm, dry, windy days, when pollen counts are the highest.

• Wear a hat when outdoors, and wash your hair often. Your hair is like a magnet to pollen, so avoid transferring it to your pillow by washing your hair before you go to bed.

• Wash your linen and clothes more often. And when you do, don’t hang them on a line outdoors to dry. This just allows the newly-clean clothes to pick up pollen in the air.

• Wear large glasses or sunglasses. They can help when you’re outdoors to keep pollen from being blown into your eyes.

• Use a saltwater nasal spray. Mix a teaspoon of table salt with eight ounces of water. Using this twice a day to wash allergens out of your nasal passages and keep them moist.

There is no “cure” for hay fever, but most people can take advantage of the following treatments to reduce the discomfort of their symptoms:

• Antihistamine sprays or tablets. Many of these are available without a prescription. They stop the release of histamine, and can usually relieve many of your symptoms.

• Anti-inflammatory nasal drops or sprays. These medications can reduce inflammation in the lining of the nose.

• Eye Drops. Solutions containing cromoglycate can reduce itching and swelling in the eyes, and are commonly used in conjunction with other medications.

• Oral corticosteroids. If your symptoms are severe, your doctor may prescribe these medications.

• Desensitization treatment (immunotherapy). If your symptoms are severe and not relieved by other treatments, a series of anti-allergy shots may be prescribed. In this treatment, increasing amounts of the allergen are introduced, until a tolerance develops.