The age of gene-doping is here!

Recent advances in human genome research will soon make it easy to go shopping for tailor-made cardiovascular systems and muscles to suite your sport. According to some, even as we speak, athletes may already be ‘doing it’ (in fact, since the Beijing Olympics in 2008!).

Mention of gene doping (as a prohibited method) appeared in WADA’s banned anti-doping list for the first time in 2003. (To download the 2012 list of banned substance, click here – please look under M3 (banned method 3) for gene doping). 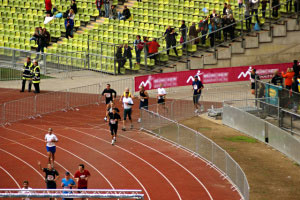 The list mentions that gene doping – with the potential to enhance sport performance – remains banned. This includes the following methods:

2. Use of normal or genetically modified cells

This novel technique has the potential to drastically (and permanently) change performance enhancement for sports. In a world with rampant gene doping, tablets and capsules will be history. Furthermore, most doping tests (as we know them) will be rendered defunct. As the science behind gene doping gets more hi-tech, it will become increasing difficult to differentiate between the ‘gene-cheats’ and the ‘gene-freaks-of-nature’.

What Is Gene Doping?

So, what is gene doping and how does it enhance performance?

To know the answer, let’s have a closer look at the science behind it all:

A gene is a snippet of human DNA containing information (genotype) which is used to produce individual characteristics (phenotypes) like blue eyes, black hair and so on. In nature, these pieces of information are handed down by parents to their offsprings. However, advances in science has now made ‘gene tampering’ a reality.

Scientists working on the human genome have been able to separate specific genes coding for hormones and growth factors which can specifically enhance performance in elite athletes.

Some of these are:

• lipolysis (break down of fats)

Methods of hGH doping are administration of recombinant hGH, precursors or secretogogues.

In addition, gene manipulation for muscle growth by inducing hGH secretion is a rapidly emerging technique1. Administration of a recombinant adenovirus encoding for hGH has demonstrated anabolic actions2.

Up until recently, hGH doping was difficult to detect. Abnormal ratios between different isoforms of hGH was the basis of current methods to detect ‘wrong-doing’. Unless better analytical tests for detection are developed, growth hormone gene-doping promises to be a very realistic threat.

IGF-1, in combination with growth hormone and insulin, is responsible for most of the anabolic growth stimulus in the human body. Synthesised and secreted by the liver, it serves a plethora of functions3:

• protection of cartilage and neurons

• additionally, IGF-1 can stimulate insulin receptors (albeit, at higher doses) and thus mimic anabolic actions of insulin like protein retention and actions on carbohydrate and fat metabolism

As opposed to IGF-1 (growth regulation in adults), IGF-2 provides the major stimulating force during foetal (intra-uterine) development of an individual.

Since IGF-1 is localised to the muscles, chances of systemic side effects with spiked up levels are (currently thought to be) minimal.

Erythropoietin (EPO) is a hormone produced by the kidney; it serves the following actions:

1. maintenance of optimal red cell mass for oxygenation of tissues; production of EPO is regulated by the demand of oxygen by tissue4

2. absorption of iron to facilitate the production of haemoglobin (to be packed inside red cells)

These processes (together) ensure enhanced supply of oxygen to tissues especially to exercising muscles.

A popular method, allegedly, used to deliver genes to their loci is by coupling these genes to a vector (carrier) like an adenovirus.

Animal studies have conclusive proved that such method of administration of EPO does succeed in increasing haematocrit by up to 81%; these effects last for almost a year6;7.

Present gene doping techniques cannot be detected by studying bodily fluids: urine or blood samples. Doping even with recombinant EPO has proved to be quite difficult.

Although recombinant EPO is detectable in serum and urine samples, it is difficult to prove ‘wrong-doing’ conclusively. Furthermore, a high haematocrit (a measure of high red cell count) does not necessarily suggest ‘doping’. This is so because it is quite difficult to differentiate between physiological rise in haematocrit (athletes from high altitude, pregnancy and genetic mutation) and that induced by ‘doping’.

Furthermore, close monitoring can ensure that even in athletes using recombinant EPO, serum and urine levels as well as haematocrit can be maintained within normal ranges.

Similarly, in athletes (who have been) administered genes (coding) for IGF-1, detection of any ‘wrongdoing’ is bound to prove difficult. A major practical difficulty is the need to take muscle biopsies for such detection. (Ouch! Don’t know about you, but I would definitely have concerns for such invasive procedures!).

Gene doping is still at a stage of infancy. As more and more genes enhancing health and fitness parameters are discovered, the list of genes with the potential to enhance sports performance will expand exponentially. Even as we speak, more than 100 intra-cellular and intra-nuclear sites for such genes have been discovered; more genes are being discovered every single year8.

As of now, gene doping seems to be near impossible to detect. Unless foolproof tests for genetic ‘wrong-doing’ can be designed and implemented, a scramble for ‘designer genes’ in the very near future seems to be very much on the cards.