Sometimes it can be difficult to know if the guy you are talking to is just being really friendly to you or whether he is in reality flirting with you. It can be incredibly hard to gauge, especially when it is someone you have never met before. For some people flirting is a part of their personality and they will do it with everyone that they meet regardless of age or gender, it is as much as part of their character as is their sense of humor or the color of their eyes. This doesn’t make things any easier for you, after all you need to know if they guy with the twinkling eye and killer smile is really flirting with you or is just a damn nice guy! 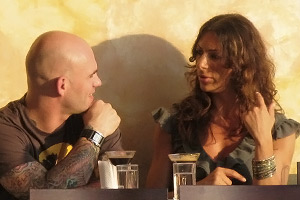 Sometimes for a person who is generally quite shy and introverted, just standing close to you and having a conversation could be their idea of going out on a limb and flirting with you. But whatever the situation you are in, you need to ask yourself whether the person that you are talking to is really being themselves or are they putting on a show especially for you? Once you have decided whether they really are flirting you need to get to grips on the motive for it.

Just what kind of flirting behavior is it? Is it just a bit of fun designed to make you feel good and have a giggle in the process, is he considering coming back for a ‘coffee’ or is he picturing you by his side as you head off into the setting sun together. The thing is on first glance there isn’t any really way of knowing, that is why you need to take a closer look at what his body language is telling you, not just his face and his words.

It’s All in the Body Language

It’s time to take the focus away from what he is saying to you and look instead at what his body language is telling you. There is no harm in him continuing to flatter you with his words while you have a really good look at the non verbal communication that is going on. How close is he standing next to you? Is he focused entirely on you, giving you eye contact or is he still looking around the room?

Once you have given his body language the once over, take a look at your own. Are you giving off the signals that are telling him that you are interested in him? Are you facing him, returning his eye contact, are you both leaning towards each other? There is a simple way to run a quick check to see whether someone really has the hots for you or is just being friendly towards you. To be really interested in you he needs to be displaying at least four positive body language indicators towards you.

One of the best ways to measure just how interested he is in you is to do the following subtle test. When we are really interested in someone we do what we can to stay close to them, and without realizing it we mirror their body language. Deliberately, but subtly change your position, if he is interested he will alter his position accordingly in order to stay on the same level as you and at the same proximity. Don’t make your move too sudden or do something negative like step back or cross your arms as he may read these as signs that you are totally not interested, and will probably move away himself.

Instead of moving away, lean the top half of your body in towards him a little and see what happens, make it natural like leaning in over your drink to play with your glass or a straw for example, place your hand on the table with your palm downwards, just a little closer to his side of the table than to your side, movements that he could easily mirror without appearing awkward. If he is still mirroring your movements you can assume that he is interested in getting to know you a little better.

Turn Up the Heat

One way to know for definite if he really is interested is to step up the level of your own flirting. This is where subtlety goes right out of the window! Intensify your own body language and lean in towards him as close as you can and see if he mirrors you. Find a reason to touch him lightly on the upper arm and let your touch linger, notice if he pulls away slightly or is comfortable with you touching him.

Wait for a subtle pause in the conversation and engage him in eye contact, hold it for several seconds with the sultriest look that you can muster, before breaking into a smile. At this point you are very openly telling him that you are aware that you are both flirting. Providing he returns your smile and does not pull away you’ve bagged yourself a man. If he turns and runs then he was just in it for the fun and you have raised the stakes too high for him, still, better find out now rather than later.