Lactose intolerance refers to the symptoms experienced by people taking in milk products who cannot digest milk sugar properly. Lactose, the scientific name for milk sugar, contains glucose and galactose. The enzyme lactase, in the lining of the small intestine, is supposed to break lactose down into these two sugars, which are then easily absorbed. Without enough lactase, lactose cannot be split in to its two components, and continues to pass through the intestinal tract.

When lactose enters the large intestine in great enough amounts, people can have symptoms, including bloating, gas, abdominal pain, nausea, diarrhea, and cramps. A person with some lactase can tolerate some milk products. The less lactase they have, and the more milk products they consume at one time, the worse the symptoms. Symptoms usually start between 30 minutes and 2 hours after consuming milk products, but this depends on the person. 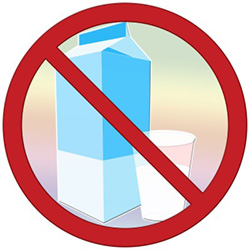 Most lactose intolerance, the type described in this article, occurs because people lose lactase as they age. There is a rare genetic problem in which infants have essentially no lactase. People can also lose lactase because of inflammation in the small intestine, which resolves when the intestinal illness is treated and improves.

Who has lactose intolerance?

Essentially all babies have enough lactase. As they get older, some children start to lose lactase. In adulthood, they may have very little or no lactase. Whether or not a person is likely to develop a deficiency of lactase is determined by genetics.

In countries where the diet is rich in dairy products, such as England, most people do not lose lactase. In places where milk products are consumed rarely, like parts of Africa, most adults have little or no lactase. In people of mixed heritage, some may continue to have lactase while others do not.

In the United States, many people are deficient in lactase and experience the symptoms of lactose intolerance, which gets worse as they age. There are challenge tests which can point to lactose intolerance. However, these tests are rarely done in practice. The diagnosis is made in patients who experience symptoms from milk products which go away with the limitation of these products and return when they are re-introduced into the diet.

Studies based on self-reported lactose intolerance and/or tests based on symptoms after a lactose challenge reveal differences in the United States. As noted previously, more adults than children have lactose intolerance. The percent of people affected is much higher in Hispanics and African Americans than Caucasians.

Studies based on self-reported lactose intolerance have revealed that 12% of American adults have symptomatic lactose intolerance. The rate is 8% in those of European descent, 10% in Latino-Americans adults and 20% in African-American adults. These statistics are from reports of people with symptoms. There are people who do not have much lactase who do not have symptoms.

The term lactose malabsorption refers to the fact that lactose is not absorbed in people with lactose intolerance. After being given a challenge with a standard amount of lactose, tests can measure malabsorption. These tests show that many people actually are deficient in lactase but don’t have symptoms. As many as 70% of African-American adults and 50% of Latino-American adults lack normal amounts of lactase. Some reports put the incidence of actual lactase deficiency in adults at 70% of the world’s entire population.

It is estimated that 30 to 50 million American adults have lost their lactase. In addition to African Americans and Latino Americans, Native Americans, Alaskan natives and Pacific Islanders have more lactase deficiency. Asian Americans also have higher rates of lactose intolerance.

How much milk products cause symptoms?

This varies from person to person. Those who do have some lactase can tolerate more than those with no lactase. Also, more symptoms occur when a lot of lactose-containing milk or milk products are taken in at one time.

Someone may not be able to drink a glass of milk, but handle an equivalent amount if it is spread out throughout the day and put into other foods. Some people can tolerate cheeses and yoghurt but not milk. Cheddar and Swiss cheese do not bother many people with lactose intolerance. Others tolerate milk products that have been cooked, in baked goods, casseroles, or other foods that have been heated.

It is better to try and find some tolerated milk products along with the use of lactase supplements.

Milk products can be added to food, taken with meals, and eaten in certain forms that seem to cause fewer symptoms for some people, like cheese. Individuals can try various combinations to see what causes the least symptoms.

“Lactose-free” milk is available, although it is not quite 100% lactose free. There is lactose-free cheese and lactose-free ice cream. New products are frequently appearing on the market. Anyone with lactose intolerance should keep their eyes open when shopping, because they may find a lactose-free version of a food they really miss.

Taking a supplement containing lactase (like Lactaid®) can allow people to drink milk or eat milk-containing foods with fewer symptoms. Lactase pills are very safe. Individuals need to experiment with lactase pills, taking them before and sometimes during a meal.

Probiotics, which are products containing “good bacteria” that have enzymes that can break down lactose may help reduce symptoms of lactose intolerance. These are found in the yoghurt section of the supermarket.

Individuals who are extremely sensitivity need to read food labels for anything related to milk. This can include lactose, whey, curds, and milk products. Lactose can be found in some medications and vitamins, both prescription and over the counter.

Lactose intolerance is not a food allergy. The reactions and symptoms are not dangerous.

What happens when people limit their consumption of milk-containing products?

Milk products are the best, natural sources of calcium. Children and adults who avoid milk products because of the symptoms of lactose intolerance may not get enough calcium. This can lead to weak and thin bones, a condition called osteoporosis. Some studies have found a significant increase in bone fractures in those with lactose intolerance as well as a measurable difference in bone density.

Adding milk products or calcium back into the diet of people with lactose intolerance has been associated with stronger bones in a number of studies.

If the diet is really free of milk products, calcium supplements are essential. The amount of calcium needed depends on age. Teenagers need 1,300 mg of calcium a day. Adults need 1,000 mg a day. After age 50, 1,200 mg a day are needed. Vitamin D, which is added to milk, also must be taken in some other form. Many supplements contain vitamin D and calcium together.

Lactose intolerance is very common in adults. Most infants can tolerate the sugar in milk, but as children age, they lose the ability to break down lactose into glucose and galactose. The lactose that passes into the large intestine can cause symptoms of bloating, cramps, diarrhea, flatulence, nausea and pain. These are very non-specific symptoms and can be confused with other problems.

The diagnosis of lactose intolerance is made without lab tests, by a person’s history of symptoms related to the ingestion of milk and milk products. Treatment ranges from partial to complete removal of milk products from the diet, taking lactase pills with milk products or getting lactose-free products.

If milk is not tolerated in any form, it is important to make sure there is enough calcium in the diet. Calcium can be found in many milk substitutes, like soy and almond milk, added to orange juice and breakfast cereals, or in supplemental tablets.