Are you getting enough sleep? If so, that makes you almost unusual. Reporting on the results of a recent survey of 74,571 adults, the Centers for Disease Control reported that 50 to 70 million adults suffer from sleep disorders, so many that sleep problems are considered the number one health problem in America. 35.3% of the people surveyed said that they regularly get less than seven hours of sleep in a typical 24-hour period. The CDC went so far as to say that in the US “insufficient sleep is a public health epidemic.”

What are the risks associated with sleep deprivation? 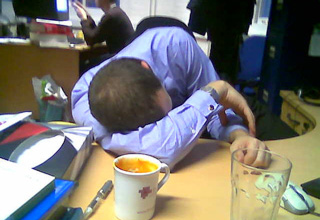 Some of them are practical, and most people are aware of them. The drowsiness caused by lack of sufficient sleep is known to be a major cause of lack of productivity in the workplace, and it’s a major cause of accidents. Driver fatigue is responsible for an average of 1,550 fatalities and 56,000 motor accidents every year.

But recent studies have indicated that chronic sleep deprivation – getting less sleep than you need for long periods of time – may be a cause of many health problems as well. Sleep deprivation may cause diabetes, and can increase the risk of you suffering a heart attack or stroke. It can cause memory problems and depression, weaken your immune system, and cause an increased perception of pain. Lack of sleep contributes to your risk of obesity, cancer, and other diseases. It can even make you impotent and cause a lack of sexual desire.

• A paper presented at the American Heart Association’s Annual Conference on Cardiovascular Disease Epidemiology and Prevention showed that subjects who slept fewer than 6 hours a night were more likely to develop impaired fasting glucose, often referred to as prediabetes, which is considered a precursor to diabetes.

• Research on over 470,000 participants in eight countries, reported in the European Heart Journal, found that sleep deprivation increases the risk of heart disease and stroke.

• A national study of over 10,000 Americans found that adults aged 32 to 49 who sleep less than 7 hours a night are significantly more likely to become obese.

• The Nurses’ Health Study, conducted at Harvard University, has found links between insufficient sleep and increased risk of colon cancer, breast cancer, diabetes, and heart disease. Another study on 82,000 nurses found that those who sleep less than 6 hours a night have an increased risk of death.

• Studies at the University of Pennsylvania found that sleep deprivation resulting from sleep apnea resulted in decreased libido and a loss of interest in sex.

How much sleep do I really need?

That’s difficult to say, because it varies by individual, and by age. Infants need 16 or more hours of sleep per day, and teenagers an average of 9 hours a night. Most adults need 7 to 8 hours of sleep. One way to tell whether you’re suffering from sleep deprivation is if you feel drowsy during the day.

One reason sleep deprivation so dangerous is that its effects are cumulative, causing what doctors call sleep debt. The amount of sleep your body needs increases with every night you have been deprived of enough sleep. In a very real sense, it’s like being “overdrawn” at the bank; sooner or later your body will demand that the debt is repaid.

What can I do to avoid sleep deprivation?

Developing good sleep hygiene is largely a matter of developing good habits with regard to sleep. Doctors and sleep experts recommend that you try not to rely on sleep medications to get to sleep. The aftereffects of these medications can often cause as much drowsiness during the day as lack of sleep.

Habits that are conducive to getting sufficient sleep include going to bed at the same time every night, and rising at the same time every morning. Many people find that avoiding large meals or the use of either alcohol, nicotine, or caffeine close to bedtime helps them sleep better. And for many people, moderate – but not strenuous – exercise before bed can result in a better night’s sleep.