Beauty may be “in the eye of the beholder,” but as I travel the world I cannot help but notice that what is perceived as beauty varies to some extent from country to country. In America and Europe, slimness seems to be in vogue. But if you travel to the Middle East or India, that doesn’t seem to be as true; the images of beauty you see on the covers of magazines and in movies often have wide hips (in women), or are rather large and beefy (in men). So I thought I’d research the topic a bit, to see if there are any universally accepted standards for what constitutes attractiveness, in the sense of finding an attractive partner, be it male or female.

What I found was interesting, because it related to articles I’ve been writing for this website, and its readers’ interest in becoming healthier and happier. Most standards of what is considered attractive – especially sexually attractive – seem to be based on whether the person appears to be healthy. 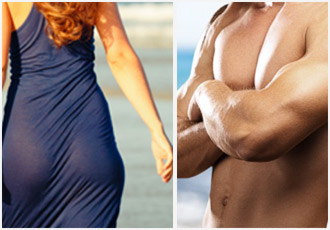 In almost all cultures, the criteria for what is thought of as attractive, especially when choosing a partner for romance or marriage, seem to be remarkably similar. And most of them come down to “How healthy does this person look?”

There are traits that seem to have more to do with aesthetics, such as symmetry. In both sexes, faces and bodies that are perceived as symmetrical – both sides being “well matched” or appearing to be of equal proportions – are thought of as more attractive than the opposite. Similarly, there seems to be a universal appreciation for bodies that are average, and that don’t stand out too much from the norm. That is, neither too tall nor too short, neither too skinny nor too fat. This has been theorized to have something to do with a subconscious appreciation for the mechanics of genetics, in that “average” is an indicator of the absence of genes that are potentially maladaptive.

What are some of the individual traits universally accepted as attractive?

There are many such traits, but in the following points I’ll present an overview of some that have been recognized by psychologists and social scientists all over the world:

• Clear skin. In both sexes, having skin that looks healthy and is free of acne, rashes, and other indications of possible systemic imbalance is considered healthy and attractive.

• Good hair. In both men and women, having hair that is lustrous and vibrant and that looks healthy and well-cared-for is considered a sign of attractiveness. In women, long hair is almost always considered attractive; scientists tend to believe that this is because only someone who is in good physical health can grow hair longer than, say, just below their shoulders. Waist-length hair indicates extremely good physical – and thus reproductive – health.

• In women, “classic” bodies. Interestingly, given the obsession we see in recent years with being model-thin, this is not what most men cite as attractive. They are more attracted to women who have fuller hips and buttocks (possibly because that is unconsciously associated with easier childbirth), and a waist-to-hip ratio of 0.7.

• An attractive body often “offsets” a less attractive face. In studies around the world, this has been found to be true both for men and women, far more often than the opposite. Again, there seems to be a health and reproductive health tie-in.

• Smiles are all-important. This is consistent in all cultures. The quality of a man or woman’s smile is often listed as the most important consideration as to whether they are attractive or not. This makes sense both physically and psychologically, because the quality of one’s teeth is another health issue, and the ability to smile naturally and often is a good indicator of how much happiness and sense of self-worth the person has.

• Hygiene. Cleanliness and a sense of caring enough about oneself to keep one’s body, hair, skin, and clothing clean and fresh-looking is universally considered attractive, possibly again because it’s a good indicator – in both men and women – of the person’s sense of self-worth and well-being, and thus their psychological health.

• Posture. Both men and women who sit and stand with an erect, healthy-looking posture are universally considered more attractive than those who slump or carry themselves with a posture that doesn’t appear healthy.

• Energy levels. High energy levels – meaning a healthy, natural, vibrant kind of energy, not a nervous or edgy energy – is considered attractive in both men and women. And again, our energy levels are classically tied to how healthy we are.

While there are variations of these “attractive traits” from country to country, and from individual to individual, the trends found by scientists who have studied them are unmistakable. As human beings, we tend to be attracted to other human beings who are healthy, happy, and energetic.

This is good news for women who look at super-slim models on the covers of magazines and feel negative about their fuller body, or for men who look at handsome movie stars and wonder how anyone will ever find them attractive compared to them. The secret to being considered attractive primarily lies in being healthy and happy, something that any of us can achieve.