That condition – in which up to 30 times an hour your breath stops during sleep – affects millions, and can adversely affect their health. Sleep apnea prevents those who have it from getting enough rest at night, and results in feeling chronically tired or drowsy during the day, but can also lead to more serious conditions, such as mood swings, depression, headaches, memory problems, and even impotence. Sleep apnea has also been linked to increased risk of heart failure, stroke, and diabetes. 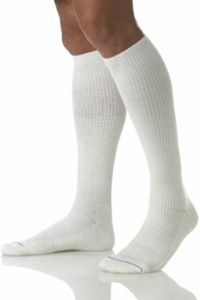 Many of the treatments for snoring in the past have also been used to treat sleep apnea, but most of them have been fairly intrusive or uncomfortable, such as wearing a CPAP (Continuous Positive Airway Pressure) device. The CPAP fits over your mouth or your nose and blows air through the mask to keep your airway passages open so that they won’t collapse during sleep and cause either snoring or stoppages of breath. Other treatments involve dental appliances or “splints” that you wear in your mouth during sleep to prevent obstructions to the airways.

Both of these “cures” sound awful – isn’t there a better treatment?

Fortunately, for a lot of people who snore and/or suffer from sleep apnea, there is a new treatment, one that is natural, drug-free, inexpensive, and needs to be used only during your waking hours – wearing support stockings.

Really. I know that you’re probably thinking, “What could possibly be the connection between wearing support stockings on your legs and snoring, which happens in your nose and throat?” The connection is the buildup of fluids in the legs that many people who have edema or poor circulation, or who are taking certain blood pressure medications experience. At night, when we recline, this buildup of fluids makes its way up to the neck, where it puts pressure on our airways there, and can cause snoring or sleep apnea.

The idea is that wearing the compression stockings keeps fluid from accumulating in the legs, and instead allow it to be handled as it normally would by the metabolic system. If there is no buildup of fluid during the daytime, there is no fluid to gravitate to the neck area during the nighttime. The support stockings are normally used to treat varicose veins, to prevent blood clots, and to regulate blood flow through the legs, but they seem to also work to prevent the buildup of fluids.

Scientists in France found that subjects who wore the support stockings during the day experienced less snoring and fewer episodes of sleep apnea during the night. Dr. Stefania Redolfi, head researcher in the study, said “The extent to which simply wearing compression stockings reduced apnea in just one week was not expected.” Subjects in the study who wore the stockings showed an average reduction of 62% in overnight leg fluid volume, compared to those who did not wear them. They also showed a 60% reduction in nighttime neck circumference, a measure of those fluids gravitating to the neck area during sleep.

Similar results have been found by UK researchers working in conjunction with Canadian scientists at the University of Toronto.

So if you snore, you might just give support stockings a try during the day. At less than 20 dollars a pair, they might eliminate your snoring, and help both you and your partner to sleep better at night. If you have sleep apnea, they might just keep you from developing more serious health problems.