All friendships, no matter how long they have been in place or how deep they are will go through ups and downs. Things will be said in the heat of the moment that should never have been said. Feelings will be hurt and the friendship will be wounded. Someone will have to make the first move and make an apology so that both of you can recover from the upset and so that the friendship can move onto fresh ground.

Apologizing is not easy and it needs to be approached sensitively. You may not even feel as though it is you that should make the apology, but unless one of you does your friendship will never truly recover. An apology stops the issues that caused the upset being swept under the carpet where they will lay unforgotten until the next time the friendship hits a bump in the road. Someone needs to make the first move to clear the air or else the friendship will stagnate and slowly fall apart.

Apologies Can Boost the Relationship 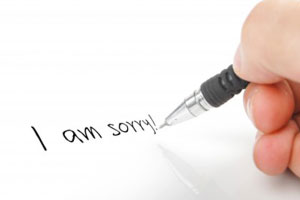 By making an apology you are acknowledging that you either did something wrong, misunderstood a situation or placed your friendship in jeopardy. Taking this first step is a powerful indicator that you value your friendship far too much to let it fall apart over a misunderstanding. By apologizing you are showing that you are taking responsibility for your actions which in turns makes it possible for your friend to show forgiveness. Without an apology being aired it can be very difficult to make up and move on after an argument.

The fact that you are going through the process of making an apology shows that you have true credibility as a real friend. Sometimes we are forgiven easily without an apology needed, but even though it is deemed not necessary it should still be offered, as it shows that you do not take the friendship for granted. If you are a person who can take responsibility for their own actions it shows to your friends that you have integrity and your friends will respect you for it.

What Makes a Good Apology?

There are several elements to a good apology, but how the apology is formed is going to be dependent on the nature of the offence, when and where it occurred and who you are making the apology to. Whenever you are making an apology you should make sure that you include the following elements:

Bearing in mind that by making an apology you are taking responsibility for the situation, you should never make an apology just to keep the peace or to shut up an antagonist who claims that you have hurt them by your actions, when you are pretty sure that you have done nothing wrong. If you truly believe that you are not in the wrong you need to have an open an honest discussion with your friend to discover why they are feeling so offended. Things to avoid saying:

Give Your Friend Space

Depending upon the nature of incident that caused the upset in first place, it may take a while for your friend to forgive you. Once you have made your apology you need to give them the space and time they need to process it and decide whether they are willing to accept it. Hopefully your friend will be able to accept you apology if they felt that it was sincere and should be able to put the incident behind them pretty quickly. Of course some incidents take longer to get over than others, so don’t try to force the situation.

It is through the ups and downs of our friendships and other relationships that help us to grow as people. We need to accept when we are in the wrong and be a big enough person to be able to take responsibility for our actions. By acknowledging that in the eyes of others, our behaviour is not perhaps as acceptable as it should be, we can learn to adapt and modify our behaviour to allow our relationships to develop into deeper and more long lasting friendships.

Laura Ginn is the founder of the article writing service Ink Elves and the extreme sports magazine Extreme Sports X. Originally born in Leicester, England she now lives in Greece and spends her days doing what she loves best - writing.

Laura Ginn is the founder of the article writing service Ink Elves and the extreme sports magazine Extreme Sports X. Originally born in Leicester, England she now lives in Greece and spends her days doing what she loves best - writing.