If your water was making you sick quickly then you’d most likely notice it, so count your blessings that at least that isn’t happening. However, just because you don’t vomit straight after cleaning your teeth every morning (which would be counter-productive), that doesn’t mean that your water is completely healthy and good for you and there is a lot of suspicion surrounding precisely what goes into our water. Let’s have a look at whether or not you need to worry… 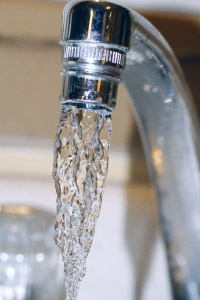 Forgive me if I’m being a bit flippant here, but the reason for my slightly dismissive attitude is that there is far too much hype and scare mongering online about this kind of thing. We will look in a minute about some of the things that go into our water, and whether or not some of them might have potential negative impacts on our health and we will look at how your water might get contaminated along the way too. However the first point I want to make clear is that your water isn’t dangerous, it’s not poisoning you and it’s not making you ‘sick’. The simple fact of the matter is that millions of people drink their water at source, and if you look around the street – most of them are pretty healthy (looking out the window now I can see a couple of people who look a bit deranged but I’m not going to blame the water).

My point is that any effect your water might have on you is likely to be pretty minor and there is no big conspiracy here. The government has no motivation to poison you and you’d have noticed by now if something like that was going on. Now moving on…

Things That Are Added to Your Water

Several things get added to our water depending on where you live and these include things like fluoride and chlorine. Fluoride is what we get in our toothpaste and it has been added to some water with the aim of protecting children’s teeth. There is a lot of controversy surrounding the issue however as it can be lethal in high doses (5 to 10 grams – so stop eating your toothpaste!) and may also affect bone formation and cause stomach complaints. However while this is true in large doses, the amounts used in tap water are not enough to cause any such effects and the only potential effect is on the shape of children’s teeth – which is very rare and very mild even if it does occur. Again let me stress that if it was dangerous then they wouldn’t put it in? How do I know this? Because Dr Evil isn’t real…

The same then also goes for chlorine in our water – which exists in order to kill off bacteria, and would be toxic in high quantities but isn’t high enough to cause any problems as is. It’s safe to say that anything that has been added to our water has been tested thoroughly first to ensure that it’s safe. Apparently chlorinated water can destroy vitamins that we would otherwise get in our diet – but again not in these quantities and not too many people seem to be suffering from deficiencies to me (particularly considering they generally aren’t getting their RDA to begin with). There are some by-products however that can be caused as an effect of the disinfection process which are not tested for, but it’s again unlikely that these are going to cause severe damage to your health.

Okay but what about the other stuff that gets through? Like bacteria and things that we throw down the toilet. When the water gets filtered can it really get rid of all those chemicals and all of those pollutants? Well the answer is no, and indeed some studies have found traces of antibiotics, hormones and pain killers in our tap water. A particular concern is that men are increasing their oestrogen levels through drinking tap water due to many of the hormone replacement therapies that are getting flushed down the toilet. These aren’t monitored by the government, but the chemicals aren’t likely to have any effect in the miniscule doses that they occur in in tap water – you’d drown before you overdosed on antidepressants.

Meanwhile our drinking water can also be contaminated by the nitrogen containing fertilizers used by famers and this results in the presence of nitrate and nitrite via human and animal excretion and seeping into the water supply in other ways. Nitrate and nitrite can cause ‘blue baby’ syndrome in infants by affecting the red blood cells, but this is only caused by excess quantities of the chemicals. It does not affect adults though it hasn’t been tested in the short term, but the important thing to remember here is that anything that makes its way into our water is going to be absolutely microscopic (to the max). Nitrate and nitrites are monitored by the government meaning that they aren’t likely to reach dangerous levels.

Why You Don’t Need to Worry

Of course nitrate and nitrite aren’t the only toxins that can get into our water and through our filter system and there’s not really any telling what gets picked up from the pipes and sewerage along the way to your glass. But the real point is that it would be nigh impossible to create water that was completely pure. The government is trying its best – hence the disinfectant – but some bacteria and toxins will always make it through.

The point is though, that our body is designed to be able to handle low numbers of bacteria – it’s what the immune system is for and actually it’s how the immune system strengthens itself. In the wild we would have gotten our water from streams and that certainly would not have been free from bacteria. Your dog often still does drink from rivers and notice how it probably doesn’t get the flu quite as often as you do?

But of course there will be cases when our tap water does make us ill – and if you want to stick only to bottled water then that’s your (expensive) choice. But bear in mind that you’re still going to be taking in bacteria when you eat fruit that’s been washed in the sink, when you brush your teeth, when you eat salad or ice cream in restaurants, when you shower and generally all the rest of the time. In other words you can’t really avoid it unfortunately, and this is why it’s somewhat illogical when there is so much scare mongering going on. Get a carbon filter for your tap water if you like, but certainly don’t worry.