An estimated 20 million Americans practice yoga for health reasons, and have found numerous benefits in doing this. The gentle movements of hatha yoga have given them increased flexibility, increased their strength and energy levels, and helped them in many ways. Naturally, because many of these yoga practitioners are also concerned about their weight – seeking either to lose weight or maintain their current healthy weight – the question arises, “What do yogis eat? Is there a recommended ‘yoga diet?'”

Well, there is and there isn’t. There may, in fact, given the fact that there seems to be a name-brand fad diet for almost everything these day, be such a thing as a trademarked Yoga Diet™ that someone is trying to market to consumers. But in terms of actual dietary recommendations from the historical study of yoga, you have to go deeper, into its philosophy of how the world works. 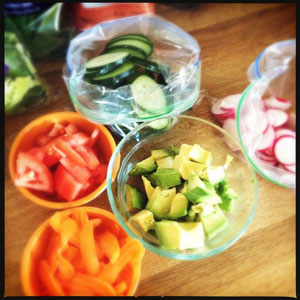 In the ancient traditions of India – whether those traditions come from Hinduism or Jainism or Ayurveda (traditional Indian medical practice) or yoga – foods and pretty much everything else are divided into three classifications: rajas, tamas, and sattva. These are referred to as the three gunas or primal forces of life, each classification personifying or identifying a certain set of characteristics. Foods that are considered rajasic are those that are considered stimulating, and that produce mental restlessness. Tamasic foods are believed to have a sedative effect, and to produce a duller, less alert mental state. Foods that are thought of as sattvic are those that – according to this theory – are full of more energy and healthful or healing properties and that produce a more settled, meditative state of mind.

Thus the theory is that by avoiding excesses of rajasic and tamasic foods, and eating primarily sattvic foods, one can re-energize one’s body and mind and help both to heal themselves. Sounds good, right?

The problem, for many Americans, is that many of the foods listed as rajasic or sattvic are among their favorite things to eat. Examples of foods considered rajasic include things like coffee, tea (either black or green), chocolate, sugary drinks like colas, and foods cooked with fiery hot spices. There goes your favorite Mexican hot sauce.

Foods considered tamasic include anything “left over” in the fridge or freezer for more than 24 hours, anything deep fried, meat, eggs, any alcoholic beverages, and anything “aged,” including cheeses. Even more unsettling for many, foods considered tamasic include many vegetables that grow “out of the sun” or underground, such as onions, garlic, and chives. Don’t even think about mushrooms, which grow in the dark.

It’s not as if a “yoga diet” would say that one should never eat these things, only that they should be eaten rarely, and in moderation.

OK, that’s good to know. So what are the sattvic foods I’m supposed to eat?

This is better news for American dietary habits, and more in line with healthy eating tips from other sources. Sattvic foods include raw or lightly cooked vegetables, whole grains and breads made from them, fresh fruits, beans, nuts, many milk products, and raw honey. Foods that are grown organically are considered better than those grown conventionally.

Basmati rice is considered both sattvic and healthy (although brown rice is not…go figure). Barley is recommended, as are almonds (although in the Indian view only blanched almonds) and sesame seeds. Among fresh fruits, dates, figs, mangos, and oranges are considered highly sattvic, and thus better for you.

So if there were such a thing as a prescribed “yoga diet,” it would probably be fairly healthy for many people, but definitely not for everyone. So in the end, when looking to the traditional study of yoga for tips on how to improve our eating habits, we should probably rely on its more general advice – prefer pure, fresh foods and consume them in moderation. Whether you practice yoga or not, it’s hard to go wrong by following that advice.