As people concerned about our health, readers of this Internet website have learned a great deal about how poor diet affects our health, and puts us at increased risk of contracting diseases. Many of these diseases – diabetes being the most prevalent – are essentially metabolic disorders, caused by our bodies’ inability to properly break down and process the foods that we eat, and convert them to the building blocks that our bodies need to keep us healthy.

Poor diet, with an emphasis on “junk food” that primarily consists of empty, nutrition-free calories, has been found to be a major contributor to the worldwide epidemic of Type 2 diabetes. Recent research, as reported in New Scientist in an article advertised on its cover with the scary title Food For Thought: What you eat may be killing your brain, seems to indicate that both poor diet and diabetes may be strongly associated with Alzheimer’s disease. The association is so strong that some scientists have suggested that Alzheimer’s be renamed as “Type 3 diabetes.”

In other words, junk food may cause dementia 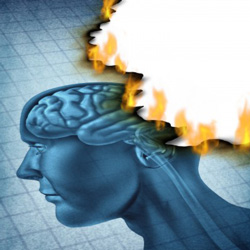 If this suggestion on the part of researchers is correct, the world – already suffering from a global epidemic of Type 2 diabetes – may in the near future have to support a parallel epidemic of Alzheimer’s, caused by the same poor diet habits.

366 million people worldwide have diabetes; it is estimated that by 2030 10% of the world’s population will suffer from it. If the suspicion that Alzheimer’s is a metabolic disease similar to diabetes proves true, that disease may follow a similar course. Currently over 35 million people worldwide have Alzheimer’s; estimates suggest that by 2050 this number will rise to 100 million.

The association of Alzheimer’s with Type 2 diabetes is long-established; Type 2 diabetics are two to three times more likely to develop Alzheimer’s than other people in the general population. Similar associations have been proven between Alzheimer’s and obesity and other forms of metabolic syndrome.

The first suggestions that Alzheimer’s was a third type of diabetes were proposed in 2005, in a study published in the National Review of Medicine. The researchers found that levels of insulin and insulin-related growth factors in the brains of Alzheimer’s patients were much lower than normal. This led them to believe that insulin – a chemical critical to life – may be created not only in the pancreas but in the brain as well. In the brain, insulin is important because it plays a part in regulating signal transmission from one neuron or brain cell to another.

Subsequent research has found strong associations between diet and dementia. The poorer the diet and the more full of calorie-rich but nutrition-free junk food it is – foods loaded with fats, sugars, and salt – the stronger association there is to the degeneration of the brain we know as Alzheimer’s disease.

What can we DO about this potential global catastrophe?

Finding a solution to this problem is complex, and multi-faceted. Clearly “educating the people” about the dangers of fast foods and junk foods is not sufficient. No matter how many books, articles, and News broadcasts warn people about the dangers of these foods, this information does not outweigh these foods’ convenience, and relatively cheap availability. The problem is even worse in poor and developing nations, where these foods are viewed as “more Western,” and thus more desirable.

There is also an economic factor that cannot be denied. The global corporations that produce and market processed foods and fast foods are not about to stop doing it. If it is cheaper to use high fructose corn syrup and “bad fats” in the production of the foods they sell – and thus more profitable for them to continue using them – they are not about to stop. Only governmental regulation will be able to get them to produce healthier but less profitable products.

Fortunately, some governments both local and national are beginning to show signs of caring enough about the populations they represent to do just that. The recent ban on sales of sugar-rich and nutrition-free soft drinks in New York City, championed by its Mayor Michael Bloomberg, is a good start. Similar bans on the use of high fructose corn syrup – referred to by its many detractors as “nutritional crack cocaine” – are being debated across America.

These initiatives will be fought tooth and nail by the people who produce the fast foods and junk foods and profit from them. It will fall to history to determine whether the people fighting food reform and thus continuing to flood the market with products that may be causing worldwide epidemics of diabetes and Alzheimer’s will be seen as Ayn Randian free market defenders, or criminals guilty of promoting nutritional genocide.